I have a question?
Does there seem to be a big swing to the dark side in the
paranormal, contemporary and suspense books? I mean – it’s to be expected that
the vampire, zombie and other world creature stories will be bloody and gory, I
accept that. But where are those light-hearted romances, the cutesy tales that
were so endearing and popular not long ago?

Good heavens…even the covers seem to be more gloomy and
depressing.

Could it be the state of our economy, which reflects this
preponderance for grim tales?

Or is it just me?

After all, I write the funny, light-hearted style of romance
and am praying the readers still wants those type of books.

What do you think?

Leave me an answer to my question and your e-mail
address and one of you will win a copy of your choice of book featured on this
blog.  All your e-mail addresses will be automatically entered on my newsletter which will give you a chance to win a free copy of any of my books with each issue…which I only release when I have news!!

Maybe it was the eagerness in her voice, or maybe just her words, but whatever she said made him smile. Up till then, he’d seemed like a stranger looking back at her. Then his smile changed everything. Unfortunately, it didn’t last too long. But she’d seen enough and decided right away that he had a dear face. Not what one would call handsome, more like interesting. She’d bet that his full head of messy hair cut short and worn close to his head normally didn’t look so scruffy. That wouldn’t be his style at all.
His piercing green eyes didn’t have the same sparkle as his mother’s. They were ruthless and compelling, slightly haughty and intense, and the shrewdest stare she’d ever come across. She felt as if he were trying to find her inside of him by staring into his own eyes.
“Can you see me?” She teased.
“I do believe I can. I went slightly crossed-eyed for a moment, and I have no doubt that was you sneaking a peek.” When he grinned, dimples appeared on both sides of his mouth and created a whole different impression. This man devastated with his attractiveness, his charisma.
Unequivocally, Abbie knew at that moment, not only had her spirit joined with his, but also her heart now faced a challenge. She’d never believed in love at first sight, more fool her. She shut down her corridor to him and curled up into a small ball lodged inside his body. This needed a great deal of thought. She had to talk herself out of this nonsense, and quickly.
1st in my new series Angels with Attitude 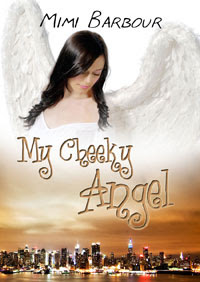 Excerpt:
Every time he closed his eyes, a strange image of Annie in trouble took on such realistic tendencies it seemed surreal. Sick of his own company, Tyler decided a walk would do him a world of good, clear his head, and help to get his mind off his tomboy gone rogue.
Once the idea appeared, it became a fixation. No choice, no dragging his feet, he had to get out of his apartment. Either he needed hallucination treatments or a curt, gravelly female had taken up residence in his brain and urged him to hurry and get his butt moving.
The elevator, not ever on his floor, awaited him with the door open and no one else inside. He shivered. Strange and stranger! The ride down lasted only seconds. When it slowly opened, a nightmare unfolded. One look at his Annie clinging to her evening’s escort and his rage superseded common sense. Without thought, he ripped her from the scumbag’s groping fingers and shoved the conceited-looking, puffed-up character against the wall. All Tyler’s six feet two inches of anger intimidated. He watched the coward evaluate, then shrink back.
Within seconds the smooth prick spoke. “Anna had a bit too much to drink. I was seeing her safely home.”
“Not a problem. I’ll take her up,” he growled. By this time, Tyler had a supportive arm around the wobbly woman. He looked down at her. “Say bye-bye to your date…Anna.” His spitting out her newly chosen name would have set worry bells ringing, if she’d been in her normal state of mind. Blitzed out of her head, she just jiggled her fingers and said, “Bye-bye, date.”
With everything happening so fast, Tyler knew Annie hadn’t had a chance to fully appreciate the change in her situation. One minute she was leaning drunkenly against the slimy character whose hands were all over her body, while her unfocused eyes gazed at him adoringly. The next minute, Tyler had taken over.