***
See poll above! (if it’s open on the poll results just click on Change Your Vote  to return it to the where you can vote!) 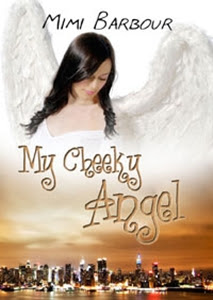 Available at Amazon
Available at Barnes and Noble
Reviews
Some authors have challenged
that it could be the cover of a book that will directly affect the sales. I
decided to try an experiment to see what you readers think of the cover of My
Cheeky Angel, and whether or not the poll results will support what my
sales have been.

When I first looked at the cover, I felt so
pleased. It depicted the story perfectly, and I knew once the reader saw the
book, they would have a pretty good idea that the story inside was an upbeat
romance. But then my preferences have always been to the light artwork of
yesterday rather than the darker edge we see everywhere today. The title would
also throw light on the theme and I felt the customers would know, that even though
it listed as a paranormal, the tale would be light-hearted and the angel a fun
character.

It’s obvious that there’s an upheaval not
only the way we can publish books today, which up till lately has always been
under the strict dictatorship of the large publishing houses, but it has
affected title and cover options also. Now that some authors have a lot more,
if not all the control, we get to see what they want to write, and how they
visualize their themes by their preferred cover selections.

Not long ago I entered the book in a cover
contest and out of the over 200 voters, Cheeky Angel received only one vote.
Didn’t seem like a very positive outcome at all, so I’ve decided to ask for
your input.

Poll is at the top of the page.

If you want to make any comments on why you chose to vote a certain way, please do. I’m extremely interested in any ideas you might have – or any suggestions!!!

Thanks so much for your help.