~***~
I’m so lucky to
welcome a wonderful writer, Lilly Gayle, to visit my blog and share with us some
of her insights into the very interesting Victorian Era!
When I think of my
Grandma who would have been born in the early 1900’s and the stories she told
me about their life in those days, I have to admit that I’m glad that my time
is here and now. I couldn’t imagine living without all the amenities we are
surrounded by today….
….I love my
computer!!
***
Most
historical romances are set in Regency England or they are Westerns, Civil War
novels, or Medieval romances.  I love
all of these genres but I also love the Victorian Era.

The
Victorian Era encompasses the time of Queen Victoria’s reign from June 1837 until her death in January
1901.  It was a time of peace,
prosperity, and refined sensibilities. During those years, Americans living in
larger cities, New England, and the Deep South, followed the fashion, fads, and
lifestyles popular in British cultural and so this time frame is also called
the Victorian Era in America.
It was a time of time of romanticism and mysticism with regard to religion,
social values, and the arts. It was also a time of moral values and sexual
restraint—a time when women began to question and later protest their roles as
nothing more than mothers, wives, and housekeepers. It was an era of reform and
enlightenment. It was also an era of economic, colonial, and industrial
expansion.  It was an era of liberal
views shifting in the direction of political and industrial reform. And a time
when women protested for the right to vote.
It was a great era in which to set a historical manuscript.
Entertainment was quite diverse during the Victorian era. Besides the
theater, balls and soirees, freak show exhibits became popular during this
time. These “shows” boasted a variety of “freaks” from famous conjoined twins
Eng an Chang to Joseph Merrick, The Elephant Man

Classic literature was
popular but so were Dime and Gothic novels.
Dime novels typically
idealized law enforcement, outlaws, or both. Gothic novels were a genre of
literature that combined horror and romance. Since women were known to write
and publish Gothic novels using male pseudonyms, it has become a popular theme
in many romance novels set in both the Regency and Victorian Eras.
Tuberculosis –then called
consumption—was the main cause of death in the latter 19th century. Because of
this dreaded disease, sanatoriums were created where sufferers were often sent
to recuperate or die. Most died. Before Luis Pasteur suggested germs as the
cause of disease and microscopes proved him right, most people believed bad
odors–called miasmas–caused sickness.
Both London and New York smelled horribly
in the early years of the Victorian Era as sewage was dumped directly into the
streets. Luckily, the flushing toilet and advent of modern sewers came about
during the Victorian Era.
The Victorian era was a time
of discovery, when germs and cleanliness were recognized as contributing
factors in survival rates after surgery. Other than alcohol and opiates such as laudanum,
painkillers had not been invented. Chloroform was the only known anesthesia,
which didn’t come into effect until the middle of the 19th century.
It often caused paralysis or death, so many surgeries were carried out with no
anesthesia at all. Operations were painful
procedures that more closely resembled torture.
The Victorian Era was also a time of
serial killers and advancements in detective work.  In 1882, fingerprinting for identification was first used in New
Mexico. In 1883, author Samuel Clemmons aka Mark Twain used fingerprinting in
his book Life on the Mississippi to identify the killer. In
a later book, Puddin’ Head Wilson, there’s an entire courtroom scene using fingerprint
identification.
In London, Jack the Ripper gained
notoriety during the Victorian Era. In America, Lizzy Borden grabbed headlines.
So did a lesser known sadistic killer, the Chicago Butcher—Adolph Luetert.
In 1897,
Luetgert, Chicago’s main sausage manufacturer, was known for his
dalliances with other women. The rich entrepreneur had dozens of mistress, but
when his wife protested his infidelities, Luetgert stabbed her, boiled her, and
put her remains through the sausage grinder. Coincidentally, the electric chair
was also introduced during this time in history.

As photography became
more common place, so did a macabre interest in photographing the dead. For a
vast number of “Victorians” death photos were the only time a loved one was
photographed.

Oddly
enough, my mother has a death photo of an ancestor, Herbert Newton, in her
collection of family photographs. She shared it with me and now, I’m sharing it
here

Swimming
became popular during this time period and the bathing suit became a noted
fashion. Although, Victorian swimwear was quite modest and those daring enough
to swim in the ocean did so by hanging on to a rope. 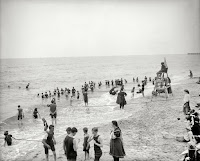 Throughout most
of the civilized world, this was a time of industrialism and creativity—a time
of inventions such as: the automobile, telephone, radio, toilet, camera, stamp,
train, vacuum cleaner, and sewing machine.
Steam was used to power factory machinery, ships and trains. And it has
since inspired a whole new genre of fiction, dubbed: Steam Punk.

Although I have yet
to pen a Steam Punk novel, I have two historical romances set in the Victorian
Era.

Here
are the Blurbs and buy links for both:

Wholesale Husband– A June 2011 Release from The Wild Rose Press~ 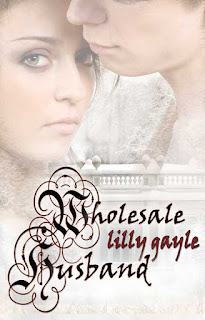 She
needs his name. He needs her money. But can a rich New York socialite and a
poor Irish immigrant find true love in the gilded age?

Betrayed
by her fiancé and heart sick over her father’s death, Clarissa Burdick is
further devastated when she learns she can’t inherit her father’s company—the
company she loves—until she’s twenty-five or married. And Clarissa is neither.
So she sets out to find a husband strong enough to protect her from her uncle’s
thugs, too uneducated to run the company himself, and poor enough to marry a
woman in name only.  But Irish immigrant
Devin Flannery is smarter than he seems and more educated than Clarissa
expects.  Her Wholesale Husband soon
proves a greater risk to her heart than her company. 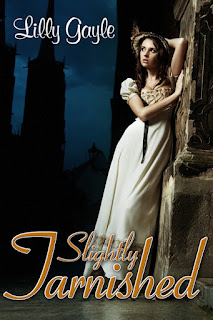 When a brooding English earl with a SLIGHTLY TARNISHED reputation marries
his dead wife’s American cousin to save her from her uncle’s vengeful schemes,
the sea captain’s daughter with a taste for adventure sparks desires he thought
long dead.

Nicole Keller has always been headstrong and independent, but after a
failed business venture and a sinking ship take her father, her home, and her
childhood sweetheart, Nikki must support herself and her mother. But moving to
England and marrying Chadwick Masters, Earl of Gilchrest isn’t what she has in
mind. And falling in love with the mysterious earl could endanger both their
lives.

Slightly Tarnished available from: : Amazon and The Wild Rose Press

So,
now you know why I love the Victorian Era. What’s your favorite romance genre?

The Shower of Books Giveaway Hop 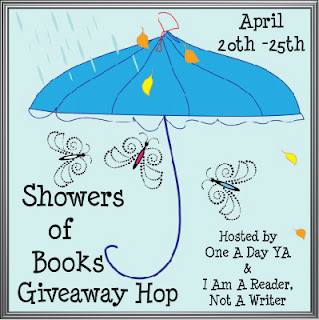 Showers of Books Giveaway Hop
For this Shower of Books Giveaway I will be happy to present the lucky winner with a free e-book of His Devious Angel – my newest release on the Angels with Attitude Series. All you need to do is leave a comment with your e-mail address. Also, Lilly has graciously agreed to presenting two lucky commenters with a copy of each of her books.

I’ll be adding your names to my newsletter list, so I hope you won’t mind getting a periodic letter from me telling of new releases and special news!