I have the pleasure to introduce you to a new friend of mine that I met at the recent Spring Fling Partay. Her name is Michelle Hughes and she writes books that will make you sit up and take notice. Her latest “A Night at Tears of Crimson” is a great read for anyone who likes book with vampires and great writing! 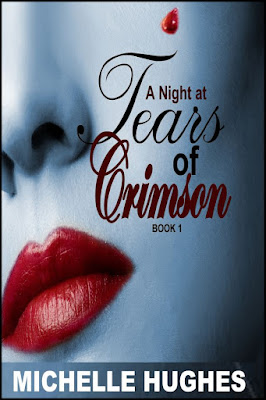 Thanks so much Mimi for
letting me come over to your blog and talk a little about myself.

What made you decide to
become a writer?
I’m
not sure if I decided to become a writer or if all the dreams I had inside of
myself decided for me.  I have been
writing short stories since I was young girl and after a twelve year career as
a singer/songwriter had ended I needed some way to fulfill my need to
entertainer while still keeping close to home.
A Night at Tears of Crimson was my first real attempt at putting
together a book that I could share with the public.
Being on a stage
performing must be different than writing for an audience that you don’t
see.  Tell us how these two entertainment
venues have changed your style.
Surprising
enough they aren’t that different.  In my
singing days I would lose myself in the songs and forget the crowd.  With writing, it’s just about being able to
lose yourself without the added distraction of people cheering while you do
it.  The instant gratification I found in
applause is now found with a great book review.
I have to say the negative reviews are a bit of a blow to my ego
though.  In the music world I wasn’t
subjected to the negatives.
Why Vampires? I’ve
noticed you have another book out besides the two paranormal romances and are
you leaning toward that direction now?
Tears
of Crimson is actually from reoccurring dreams I’ve had since I was young
teenager, so I just say I didn’t have a choice when it came to Vampires or
not.  As far as my other book, Defying
the Sheikh, well it was another dream I had and I felt it needed to be written.  I don’t consider myself just a paranormal
romance writer.  I love romance, no
matter what format it is written in.
Honestly I’m just going to keep writing what I dream about.  I feel like if it fills my dreams then it
must be something that other people have at least thought about.
I’ve noticed you do many
book reviews and even created a site for new authors to debut their books, tell
me about that?
I
love to read, even though these days it’s not as much as I would like.  Writing takes up much of my time and I always
worry when I’m working on a project that I’ll be influenced by other
books.  Until I’ve cemented out an
outline for a book I’m working on, I’ll stay clear of other books in the same
genre I’m writing in.  Thankfully I have
a strong love of most romances and there are plenty of books I can read that
won’t touch on my topics.
As
far as The Books Debut, I started that site in the hopes that other new authors
would have a platform to share their work.
It’s a very competitive market out there and getting people to share
your new book is not easy.  If you’re a
new author it’s even tougher.  I’ve had
some incredible people jump on board to help with this group and have to say
without their help it would just be a dream.
Your Tears of Crimson
Vampire Series recently became a bestseller on Kindle, how did that make you
feel?
There
is no comparison on how you feel when you finally see your book up there with
authors that you’ve respected for years.
I think the greatest feeling was seeing my book in the Vampire
Bestseller rankings with Charlaine Harris.
She’s always been one of my favorite writers and I admit I actually took
a screen shot to savor the moment.
The
first book in this series was actually published in 2009, so after three years
it’s been a dream come true seeing it finally get some recognition.
How did you come up with
the world of Singe Tsigan?
The
first dream I had of Rafe and Cara was actually on this other world.  It was a dream I will never forget because it
was so vivid.  During this dream I could
actually smell the scent of roses and felt my feet walking down the pebbled
path toward his castle.  I have to admit
that this dream still haunts me today.
Rafe was standing at the end of a portal and holding his hand out to me,
inviting me into his world.  Once I
accepted his hand, the dreams grew in intensity and most of the time I feel
like I’m just telling the story of what I saw there.
That must have been a
very strong impression for you to still remember it after all these years?
I
can’t even explain how deeply that dream effected me, or still does today.  Some nights it’s so real that I find myself
unhappy to wake up back in my real life.
All the characters in my book are almost real to me since I’ve dreamed
about them all these years.
So how long will you
continue to write about the Tears of Crimson Vampire bar?
Honestly
I can’t say.  I had thought to end this
series with the last book coming out in late 2012, but have since began to
rethink that.  As long as the dreams
continue, I guess I’ll continue to write.
I’m also focusing on a few other books that have been on my mind
lately.  So while I will continue to
write about Tears of Crimson, you can expect other books that will venture away
from the vampire romance as well.
Where can we find out
more about what your writing and buy the books you currently have on sale?
All
the information about the Tears of Crimson Books are available on my site:
www.tearsofcrimson.com   for other books that I’m working on I’ll be
posting to my author page at www.michellehughes.info  I also spend a lot of time on twitter
@MichelleHughes_ and facebook www.facebook.com/authormichellehughes  if you can’t find me at one of those places
then feel free to email me at authormichellehughes@gmail.com !
***