****
A friend, Shaunda
Kennedy Wenger, had me visit as a guest on her blog today
http://www.shaundawenger.blogspot.ca/ and her topic was about two new genres that
are now available to the public— Spirit Travel and the New Adult.
Today, for the first time ever, because of the beauty of Indie Publishing, we can write what we want…the stories from our hearts, the ones
rejected in the past.
For years the editors
from big publishing houses fiercely controlled the books that were acceptable
to receive contracts. This restraint squelched some of the adventure from
traditional authors who were very much forced to stay within certain
guidelines.
If a writer came up
with an intriguing idea about a completely new genre, because of financial
reasons, they were usually rejected. Only so many dollars were available to be
spent on so many books, and the safe choices were usually taken. Let’s face
it…this was purely a good business practise.
But things are
different now…the public gets to decide.
A few years ago I
started a series called The Vicarage Bench series. I based every story on the
idea of a person spirit travelling out of his/her own body and invading
another’s. To make the premise even more interesting, the host had to put up
with sharing. It was a different concept, one I’d never seen or read about
before, but I had a lot of fun with the idea. It’s amazing how complicated life
can get when two people have to get along sharing the same senses and a
physical self also.
My heroes and heroines
tend to complicate their lives a great deal before they find their way to Dr.
Tobias Andrews who helps solve their dilemma’s by showing them how the magic
works. I’ve found that the dialogue flows beautifully. And let’s face it, there’s
always conflict. Plus these characters have to be more intense and layered,
both singularly and as a pair.

If you’ve never read one of these books, give yourself
a treat. It might be something that attracts you enough in order for you to try
your own spirit-travel tale. 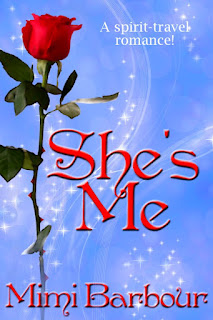 She’s Me is the first novella I wrote . It’s a fun story about a snarky, but gorgeous model from 2006 whose spirit ends up in the body of a shy, lovable, and chubby librarian from 1963.

The large, oval mirror reflected what the
top magazine photographers captured in every front-page sensation featuring
Jenna. Beauty might be skin deep as told to plain, hopeful little girls, but
Jenna had never heard those words. All her life there had been comments about
her “natural chestnut glory” or her “intense blue eyes with diamond-like
highlights.” Even her figure, slender and tall, was unproblematic, as her
system tended to wear off whatever she chose to eat, although since she chose
the healthiest of foods she glowed with fitness.
As Jenna sauntered past the mirror she
slowed to check herself out, as she was apt to do when passing any reflecting
surface, and she spied her secretary’s grinning image behind her.
“Marnie, wipe it.”
The grin disappeared, but Marnie’s eyes
remained full of merriment.
“Has Harvey called?” Harvey was the
favoured man of the month, taller than Jenna, with eyes of a similar cobalt
tone, hair silvered with distinguishing highlights and more money than many
banks.
Marnie’s answer was tinged with disdain,
which was not lost on Jenna. “Yes, he’ll be there to pick you up at the airport
tomorrow evening. His exact words were, ‘Tell her to doll up, because I want to
show her off to some college buddies who’ll be joining us for a late dinner.
They don’t believe me when I tell them she’s a female version of myself—eye
candy.’”
Jenna’s laugh was fake and forced as she
stepped outside the famous vicarage where her last shoot had taken place three
days ago. She was burnt out from the many assignments she’d crammed in over the
past few months. It seemed as though every manufacturer in the world wanted to
have her face represent their products. Enough was enough. She needed to veg
and catch her breath.
The quaint vicarage was over a hundred
years old, filled with relics from the past and a peaceful ambience in which a
person could unwind. The verdant colours of the vines, clinging in masses to
the exterior, framed the stained-glass windows, while pink roses twining in and
out, here and there, added delight for the viewer. The foliage explosion nearby
covered a crumbling stone wall that enclosed a large garden filled with hybrid
roses, all blooming and permeating the air with their fragrance. On the other
side of the wall was a surprisingly busy lane where the folks of the small town
frequently walked or drove by, following their daily routines.
Her normal choice of a holiday hotel it
wasn’t, but for some unknown reason Jenna had fallen in love with the
atmosphere of tranquility on sight and, reluctant to leave it, had rented the
nest for a few extra days for herself and her secretary to relax after the
shoot. It was essential for Marnie to stay there with her, not just for reasons
of answering the telephone and other business matters, but because Marnie had
worked almost as hard as Jenna these last few months and deserved a break.
Keeping up with the daily correspondence, being at Jenna’s beck and call and
catering to her every whim would leave Marnie a bit of time left over to spend
as she pleased.
Jenna was heading to her special place, a
wooden bench near the roadway where she could people-watch, one of her
favourite pastimes. She liked to breathe in the scents from the pink roses that
trailed over the trellis behind the bench and gave a fresh contrast to the
natural greyness of the oak. Today the scene was framed by a sky bluer than
normal. She meandered along toward the empty bench, Marnie close behind her. As
she stopped to smell a particularly gorgeous rose, a thorn bit into the fleshy
part of her finger and she suddenly squealed with pain.
Strangeness settled over her as she sat
to pull out the spine. As soon as her body touched the bench, a trancelike
state began to take hold. Her mind felt numb, and later she would swear that
her body floated away from her and disappeared in small drifts, like a cloud
shifting.
Finally, she broke loose from these
imaginings and turned to talk to Marnie, who was nowhere to be seen. She shook
her head and reached up to rub her forehead, but when she touched herself she
knew something was dreadfully wrong. It was as though she were having an
out-of-body experience. Everything around her had altered. She closed her eyes
and slumped further down on the bench. She twisted herself agitatedly, opened
her eyes again and looked in every direction. It was then she realized that the
road looked oddly different from the one she remembered.
She swivelled every which way, still
seated because she felt weakened somehow, too weak to stand. And then she spied
her dress and screamed. When she’d walked outside she’d been wearing white jean
capris and a navy-and-white designer top, with a rhinestone-decorated white
jean jacket to set off the ensemble.
Now, clutched in her shaking hands, her
garb seemed to be a full-skirted, polka-dotted garment that hung down well past
her knees and—what scared her silly—were the white gloves covering her
decidedly plump hands
***