***
I’m working on Book #4 in my Vegas series and something
rather miraculous has happened to me. I think this is the best book yet!!
Truly!!
I’ll explain.
When I started the first book, I was trying to get my work
added into an anthology with some wonderful Amazon, best-selling suspense
authors whose influence I knew would help my budding career. I was told to submit
a tale with around 5,000 words and it had to be done like – yesterday!!! So, I
got myself to work and wrote what I thought was a good story, with a
blockbuster opening and fascinating characters. I sent it in praying they’d
accept the work.
To my utmost shock and heart-stopping glee, Carolyn McCray,
the organiser and my promoter, explained to me that I had sent in the
beginnings of a full-length novel. What she now wanted me to do was to write
the short story to introduce those same characters who would appear in the book.
And then, of course, write… You guessed it! The book.
Whaa???
I was ecstatic and freaking out all at the same time. They
were going to take my work – except I still had to write it. A whole new short story
and I had like three days before they
wanted to release it….gulp.

Not one to look a gift horse in the mouth, I got my chubby
little butt into my office and worked harder than I’d ever done before. I did come up with the short story she
wanted and it was added into the
anthology. I called it “Partners”
and the following full-length book was called “Roll
the Dice”.
Well once I started the series, I got caught up in the lives
of my hero and heroine. They had to suffer and overcome huge conflicts just to
make it worth my time and effort to care about their lives. Right?? I mean
these books are suspense? And to me, that means the reader must never know
exactly what is in store for them. As affirmed by a review from Night Owl Romance. As their creator, it was up to me to keep
everyone guessing.

Except I never thought I’d be the one guessing also.
So after I finished “Roll the Dice”, I had to write a follow-up
book to set things right. I mean, I don’t want to do a spoiler here but, trust
me, it was imperative to continue. Unfortunately, I had released “Roll the
Dice” in Sept. Christmas was closing in and I had a deadline to get a holiday
book written and released by November. I had to stop writing on the Vegas
series. Feeling suspended and itching to get back to it, my promoter urged me
to write a bridge book to keep the series alive.
Huh?? What’s a bridge book I asked shyly, blushing like a
sixty-year-old virgin? Should I have
known what she meant??
She explained, without any hint of censure. Phew!

It’s a short story giving the readers a peek into the lives
of your characters while they wait for the next full-length blockbuster. Okay!
I could do that and I did. I released “Vegas
Shuffle” a few weeks ago and thoroughly enjoyed writing this
portion, because, to tell you the truth, it rather cemented all the stuff going
on in my characters’ lives in my own head also. Made everything clear for me to
know exactly what I needed to do for the follow up story called “High
Stakes Gamble”.  This will be Book
#4, which I’m madly writing now to be released in the beginning of April. 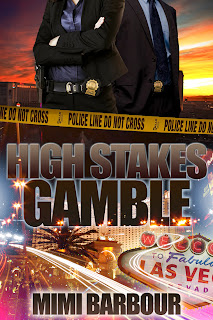 And I will reiterate what I said at the beginning. This is
Book #4 to the series and my best book yet. At this point, I’m so very comfortable with all my characters
that I know their needs, their wants, what they fear and who they love. And each
morning, I can’t wait to get back into their heads so I can add a few more chapters
and get closer to the end so…
Wanna know something else I just found out myself? There
will have to be two more books before I can even begin to think of stopping. Oh Yeah…!