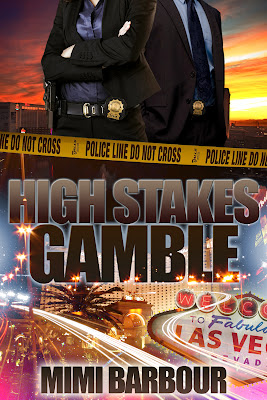 The way Mimi writes the story all of sudden you go woops it is 2:47 AM and your
cheering for a book finished. You can only smile. And then say “I want another
book please”

Aurora loves her mommy role and is fascinated
by her little angel, Lily. When babies start disappearing in Vegas, not once
did Aurora ever imagine that Lily would be one of the kidnap victims. So when
the unthinkable happens, it forces Aurora to once again partner with Lily’s
daddy, Kai, who’d previously walked out on her. This time, her heart will be
kept firmly in lock-down where it’s safely resided since he disappeared and
left her high and dry.
Almost a year later, still heartbroken over
having lost Aurora, Kai learns he’s become a daddy. When a crazy lunatic
kidnaps his baby girl, nothing can stop him from working the case, not even
Aurora’s gun pointing at places on his body he’d like to keep intact. Hope
arises when Aurora’s lips tell him to drop dead, but her hungry eyes plead for
more of his tender brand of loving.

Seconds before the doorbell rang, the hairs
on the back of Aurora’s neck stood straight to attention, whipping up shivers
to shoot down her back and into her hair, making her scalp tingle painfully.
Her ears joined in the fun and a whining noise made her jump as if she’d been
stabbed.
She knew… Just like that. Kai was the only
person who could unsettle her to this extent. Anger boiled and fizzled over to
fill her small body. Slowly she stood and moved to look out the peephole.
Sure enough, a man who resembled Kai stood
leaning against the doorjamb, a thick file of papers in one hand. An L.A. Kings
cap covered a full head of hair.
He looked away from the door and she saw
him swallow then turn. As if he felt her eyes on him, he lifted his face and
those sorry blue dazzlers stared straight through the tiny window and into her
hardened heart. Then she noticed Cory next to him. She retrieved her weapon
from the hall table, opened the door and stood back.
Cory moved in front of the chicken-bastard
and held his hand out towards her. “Put the gun down, Aurora. I’d planned to
shoot him myself but I listened to his story first. It’s cool, brat. Trust me.
You’ll want to hear what he has to say.”
She leaned to the side in order to get a
better aim and held back the grin that threatened when she saw Cory scoot out
the door and close it very carefully behind him. Fucking coward!
Kai dropped the papers on the table. “Baby—”
“Don’t you call me Baby. You gave up that
right.”
“I know. I was talking about our daughter.”
As if the idiot had no idea that her finger
itched to pull the trigger and pay him back for the pain he’d put her through,
he stood facing her, hands on his hips and a stubborn glare on his face.
“Where’s your bald head?”
“Under my hair.”
“Looks weird. I like it better the other
way.”
“So I’ll shave it. You gonna shoot me?”
“Like to. Just can’t decide if the
satisfaction would be worth the years in jail. It’s a tough call.”
“I thought of you every day.”
“You’re making it easier every time you
open that lying mouth.”
“I was undercover… deep undercover. I
brought a copy of the case files for you to read because I knew you wouldn’t
believe me any other way. Started a few days after I got back to L.A. until
yesterday when I got debriefed.”
“And the first few days you were in L.A.?”
A blush appeared on his cheeks that
arrested Aurora’s gaze and made her remember why this man had captured her
heart when no others had ever come close.
“I guess I drank enough to forget my own
name never mind yours. Not proud of being such a jerk, but it’s the truth.”
“A fucking jerk you mean!”
“I stand corrected. You gonna put the gun
away soon?”
“Just so you know how much I hate you and
how hard it is not to pull the trigger—”
He interrupted, his voice harsh. “Got it!”

Buy now on Amazon for only 99 cents!!