I’m so happy to have you meet Katy Walters today on Believe! I snuck an introduction post for her in my previous blog because it touched me so much that she would write a book to please one fan.

Hi there,
It is great to visit Mimi’s site.  We met when I discovered her wonderful books,
the Vicarage Bench Series, they are so original. I was captivated and became a
fan with the first novel.  Mimi is such a
lovely friend, and has been so caring and supportive, as I underwent surgery on
my hands and wrist. Happily, my hands are back in action.
So just a little introduction, I started
writing at an early age, when my younger sister, on being diagnosed  with TB spend most of her childhood in
hospitals.  As I used to tell her stories
in bed, I then wrote them out for her to read in the sanitoriums. This love of
writing never faltered during my career as a psychotherapist/research
psychologist. I do like to bring a psychological slant to the books, as they do
say, write about what you know.
A creative world gives the writer such
freedom.  The only thing is, one has to
be humble, baring one’s soul for the reader. Only with such openness can a
writer reach out, and touch the reader. In a truly creative work, there are no
secrets. The writer has to stay true to the characters, listen to what each has
to say and then follow wherever they may lead. I think I know when a book is
working, as I feel it, often laughing or crying with or for the characters. They
are not two-dimensional  pen and  ink,
or keyboard and PC personalities; they are living, breathing, emotional,
irate, loving, imaginative beings in their own creative dimension. Even more,
they become my friends – well most of them. Now, after having written a few
books, I trust them to lead me into and through the story.  So, I am not a planner, I only ever have an
idea, the new friends, when they start talking, drive the story.
So, I sincerely hope you enjoy meeting my
friends who live in  Reunited at Rhonan.
I do remember writing to one reader, that when I penned the last line of
Reunited at Rhonan; the last book of the trilogy, I felt quite choked as I was
leaving the world of Rhonan.  But a new
story beckons along with more friends to share their lives with me. Hopefully. 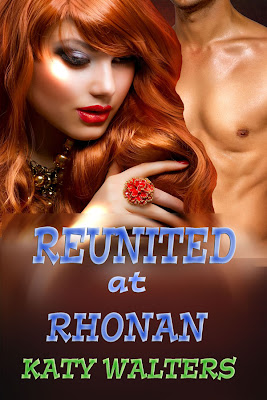 Reviewer ***** “Scary Supernatural
Romance – will hold you spell bound to the last page.”

Reviewer***** “Paranormal romance. Stunning! This book gripped me from the
first page. I love the paranormal and this had me turning the pages. It’s
a great story and the writer has a fast pace so I was glued. The séances gave
me goosebumps – chilling.”

The Incubus relentlessly pursues
Jessica, intent on making her his own. As he confronts Jess and Dinah, they
find they cannot resist him; but to give in to his sexy demands means certain
death. Can Lucy can save them, as she summons Phantom, a vicious feral cat,
once an ancient shaman, who shape shifts from cat to puma?
At the Manor, the friends open a Centre for Psychic Studies,
where Dinah develops into a strong healer whilst Lucy becomes a powerful
physical medium, a channel for good but also a channel through which the demons
manifest.
Jess time travels, relentlessly fighting to bring the ghostly lovers Muriall a
penniless ward and Lord Duncan of Rhonan together again.

Douglas struggles with his disbelief as a high-ranking demon, rages in the
castle dungeons, a demon determined to drag Jess down to hell, a demon so
powerful, it pits its strength against the Vatican itself. Will the warrior of
God, the Jesuit Tobias Marescas arrive at Rhonan in time to save them from a
horrific death?