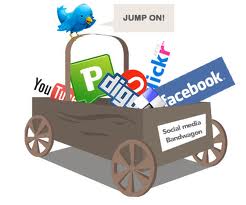 But it was always with the thought of it being for authors
who needed to network. I never thought of it as an avenue for a student in
Public Relations to build up a platform for future use.

Makes sense though, doesn’t it? Anyone in the field of making
contact with a lot of people has to be familiar with the ins and outs of the
places that will get them in front of the masses.

After all, there are certain paths that have proven to be more
effective than others. Don’t blink! They change that fast. So… one needs to
keep up with today’s world. (Remember the good old days when we only had television,
newspapers, radio, magazines, flyers – blah, blah, blah – peddling to us.)

And just because some of these sites are the past routes
doesn’t make them any the less effective. There are many people who have
remained faithful to the old standbys like radio and magazines,  Facebook and Twitter. My reasoning is that
those people are just – just people who want to learn about the news of the day or interact with friends. True, some
are there to plug their wares. And since our society is so used to that type of
interaction, it’s probably ignored.

Then again, maybe it isn’t. Connecting with the person who
writes your favorite series can be desirable. Finding a representative who
sells your favorite Epicure Products can be a real advantage when you happen to
Stumble upon someone in your area. Sharing recipes that are personally
recommended by a friend on Pinterest makes you more apt to try it than if you
found it in some old cookbook like years past.

It’s the human contact through these networks that makes us
want to be involved. Being connected! In today’s world, with the internet, we
all have that opportunity. And the sellers of the world know this to be true. Therefore,
we’ll have to accept that our favorite meeting places will always be inundated
with products for sale.

Until, that is, a newer and better place comes along to grab attention.
And it will. So students, learn all about the first social media platforms to
see how and why they were so attractive to the ordinary individual. Then go out
and set up something brand new for us to flood to.

I’m such a shameless promoter –  I hate myself….snicker!