I’m so very happy to be able to
introduce Jacqui Nelson. She’s a very good friend, a RWA conference roomie and
a very talented writer. Jacqui has finalled in and won a huge number of
contests including RWA’s prestigious and highly coveted Golden Heart. She’s one
of today’s writer’s whose dream is to be traditionally published and – no doubt
– she will be one day. In the meantime, I know there are many readers who will
love her self-published work.

Thank you, Mimi, for inviting me to be your guest today and
for hosting me and my anthology partners yesterday as well. When I moved to
Victoria in the spring of 2009, it was truly my good fortune to meet you and
then (just a few short months later) be your RWA conference roommate in
Washington, DC. What a blast I had at my first national conference with you by
my side!

Yesterday on Mimi’s blog, my Passion’s Prize anthology
partners and I discussed what had inspired our anthology. Today, I’d like to
share what inspired the next step—writing my individual novella, Adella’s
Enemy.
What inspires me personally?
I adore stories of high adventure, stories that sweep you away
to another time and place. So what adventure could I craft around a cutthroat
railroad race set in 1870 Kansas?
The starting point
My anthology partners and I began with two ideas:
1) Our stories should relate in some way to the real life
construction race between the Missouri, Kansas and Texas Railroad (aka the
Katy) and its rival, the Border Tier Railroad.
2) We should aim for stories similar to the “Hell on Wheels”
TV series which follows the making of America’s Transcontinental Railroad.
But where to go from there?
Who is my hero?
Every romance story needs a great hero. While brainstorming
possible characters as a group, a railroad foreman was mentioned. Many of the
men working on the Katy Railroad were Irish, so that was the next logical
attribute for my hero. And why not make my Irish foreman a relative newcomer to
America, a man who hasn’t lost his delicious Irish accent? But what else?
What motivates my Irish foreman?
I decided my hero would be struggling to understand a new
country while dealing with a difficult past from his homeland. Ireland’s Great
Famine sprang to mind. Approximately 1 million people died during this famine.
Anyone who did survived would’ve known someone who died, someone they might
have wished they’d been able to save.
So my hero is determined that no one else will die on his
watch. He has a railroad to protect and men to keep employed. And if the Katy
doesn’t reach the Indian Territory border before its rival, then the Katy loses
the race, and the men lose their jobs. Even worse, they might lose their lives
as the desire for rivals to best each other heats up. If any of that happened,
my hero would feel he’d failed those who depended on him. Again.
Cormac McGrady was born.
But who could I throw in the path of my hard-working but
tortured Irish foreman?
Who is my heroine?
This actually turned out to be the most difficult part. My
anthology partners and I tossed around several ideas: schoolmarm, suffragette,
shop keeper. To me, none of the these said, “High adventure.”  Then another word came to mind: spy. A female
spy sent to provoke unrest and slow down my Irish foreman’s railroad so the
rival railroad could win.
But why is she really a spy?
Because she has a tortured past of her own. At the start of
our anthology, the American Civil War had ended only 5 years earlier. Many men
working on the railroads were veterans of that war. Could my heroine have a
connection to the war as well? Had she been a spy in the war and lost someone
dear to her? I decided my heroine was on her own private mission against the
man responsible for her twin brother’s death, a man connected to the Katy
Railroad.
With this background, my heroine would be a woman with unique
talents and a ton of grit. But she just might meet her match in one determined
Irish foreman who is as highly invested in keeping the Katy rolling forward, as
she is in halting it.
Adella Willows is her name.
Hope you enjoy reading Cormac and Adella’s story!
* * *
Here’s an excerpt from Adella’s Enemy:
Adella’s fingers brushed the telegram hidden in her cleavage
and she went as still as Cormac. Blast! She’d forgotten about the telegram! She
needed Cormac to stay in her hotel room, but she couldn’t let him see the
telegram.
“How do you know what I want?” she whispered, stalling for
time.
“I don’t. But this is what I want.” In two strides, he
devoured the gap between them. Then his mouth claimed hers in a hot, heady
possession.
Pressed against the door, all she could do was kiss him
back. She did so with abandon. Her skin tingled, and her blood raced as if her
body had woken from years of sleepwalking. She didn’t want the feeling to stop.
She wrapped her arms around Cormac’s neck and pulled him closer.
He suddenly lifted his head. “I want more than one kiss,” he
murmured against her lips. “And I don’t mean merely claiming everything that’s
under this dress.” His hand slid up her ribcage to cup her breast.
The telegram! With a gasp, she covered her cleavage with
both hands. The corner of the telegram brushed her palm. Thank Dixie. It was
still there. But had he seen it? She pressed back against the door.
Cormac retreated as well, lifting his hand to rake it
through hair that was already disheveled. Had she done that? He reached for the
doorknob and she jumped aside.
“Stay away from the worksite, Adella.” He opened the door
without his customary restraint. It banged against the wall. “And, for God’s
sake, stay out of trouble. Don’t provoke a man beyond his patience.”
Passion’s Prize—an anthology featuring the novellas Adella’s
Enemy by Jacqui Nelson, Eden’s Sin by Jennifer Jakes, and Kate’s Outlaw by E.E.
Burke—can be purchased on Amazon at http://bit.ly/PassionsPrizeKDP and is also
available at B&N Nook store and the Apple iStore. 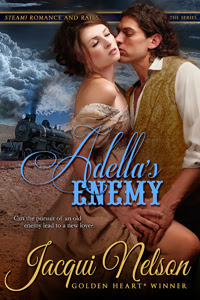 Amazon
***For one lucky commenter, Jacqui will be pleased to present a
Amazon gift copy
of her new E-book, Adella’s Enemy.
Leave her a message, making sure to include
your
e-mail address***
Can the pursuit of an old enemy
lead to a new love?
In a race for riches, anything can happen. Five years after the Civil
War, a Kansas railroad race heats up as former Rebel spy Adella Willows
receives her mission from a Washington senator. Play havoc with the Katy
Railroad and derail its bid to win the race. The senator craves wealth. Adella
craves revenge against the man responsible for her brother’s death. But her
plans crumble into chaos when she matches wits with the railroad’s foreman, a
handsome Irishman torn between two desires: winning the race or winning
Adella’s heart

Jacqui Nelson writes historical romantic adventures set in
the American West and Victorian London. Her love of Western stories came from
watching classic Western movies while growing up on a cattle farm. Her passion
for Victorian London wasn’t far behind and only increased when she worked in
England for four years and explored the nooks and crannies of London on her
weekends. Jacqui currently lives in Victoria on the west coast of Canada where
she works as a book seller. Her previous jobs have included animator, systems
analyst and fundraising event coordinator.

Her debut release, Adella’s Enemy, is part of the Passion’sPrize anthology and the Steam! Romance and Rails series. She is a Romance
Writers of America® Golden Heart® winner and three-time finalist.
www.JacquiNelson.com
www.amazon.com/author/JacquiNelson
www.facebook.com/JacquiNelsonBooks
www.twitter.com/Jacqui_Nelson
****