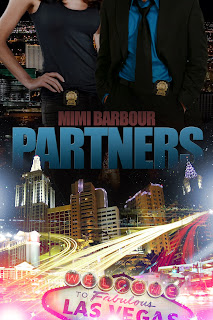 When attractive Las Vegas detective Aurora Morelli makes a friend, she takes the relationship very seriously…and if anyone hurts that person, they’re going down! While Aurora may be slim and dainty on the outside, she has the heart of a lion, and when angry, the manners of a she-cat. The sick schmuck who dared attack her partner is now her prime target, and nothing or no one will stand in her way—except maybe her new partner who arrives in town seeking vengeance on the same culprit.

Kai Lawson, a Bruce Willis lookalike, annoys her. From the very beginning, nothing seems to go right between the two of them, leaving Aurora to question if they should even be working together—especially after he shoots her—and not accidentally! Constant screw-ups on the job and the undeniable attraction building between them makes reaching her goal seem almost insurmountable…almost!

Excerpt:
Two weeks ago, life had been normal. Aurora had gone to get a cup of the sludge they called coffee and left her partner Debbie working at her desk on their backlog of case files. On her way back to their office, Lieutenant Cory Ashton had caught up with Aurora and they’d stepped into the room together, both coming to a dead stop.
Debbie, who’d lately taken to the layered look with sloppy clothes, had bent over to pick something up from the floor and her extra-large t-shirt had draped open—her pregnant belly had been revealed for all to see.
“What the hell?” Cory erupted and his explosion cut off Aurora’s absurd exclamation.
“You’re pregnant.” Soon as the words left her mouth, Aurora wished them back. No need to worry since Cory’s voice rose to a bellow and drowned out her obtuse remarking on the obvious.
“Girl, why didn’t you tell me I’m going to be a father? A guy appreciates knowing these things.” The excited man swept the curvaceous blonde into his arms and hugged her until a smile wiped the horrified expression from her face. Flying high, happier than Aurora had ever seen him, Cory continued. “We need to celebrate. A man doesn’t find out he’s going to be a daddy every day.”
Shock zipped around inside Aurora, and the memory of the horror eight months ago emerged and wouldn’t be squashed. Was this Cory’s baby? She watched her partner closely. No one knew the girl in the same way that she did. For the first time, Aurora couldn’t read her. Innocent pleasure had wiped away all traces of wariness, and Aurora had to accept that adoration shone in eyes that were empty of treachery.
***