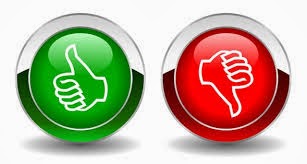 Oh yes.
I noticed that the people who wrote reviews for my
paranormal romances – which are rather light-hearted, warm and loving stories – were
very kind in their remarks. Whether they had compliments or complaints, they
didn’t tend to get nasty. Is this because the type of person who chooses these books have a similar nature?
From what I read in my reviews for my romantic suspense, Vegas Series,
the compliments were as nice but the criticisms were more down to earth. They
didn’t pull any punches so to speak. I imagine they figure if an author can
write a grittier book with swearing and realism, then they could just say what
they thought and not hold back.
I agree!
Again, there was a difference in the reviews for my contemporary genre. I found the bad reviews were scathing. They didn’t hold
back whatsoever….gulp!  Realistically, it
could be just that specific book The Surrogate’s Secret. Except, it did receive
fifty-four 3, 4 & 5star reviews versus two 1-star and five 2-star ones.
Those numbers lead me to believe it was mostly enjoyed. But boy-oh-boy, when
they didn’t like it – they really didn’t like it.
***Since I’ve written these last few posts about
reviews for the blog, I’ve become much more aware of what sparks the reader’s
into even writing a review.
In my case, it seems to be the humor. They love it
when the book makes them laugh out loud. They also seem to invest themselves
into characters they can identify with. It makes them totally care about the ending.
And in the case of the suspense books, they love the
fast-paced conflicts that keep coming one after another. Add in the romance,
and it’s been a very popular series.
Below
are a few extras I had to mention!!
This is the 1-star review for Roll the Dice that I don’t
get? **The first part about the editing is unfortunately correct. Due to a
very late night, illness and an editor who let me down, I was forced to release
a book not nearly ready. I’ve paid dearly in the comments, even from readers
who gave me higher ratings.
It’s the second part that has me scratching my head.
“This
book frustrated me for two reasons. First, the horrible editing job obviously
detracted from the story. Second, the female lead detective overlooked an
endless number of clues. She should have known what was going on so much
sooner. She came across as unintelligent and not a very good detective. Any
half-way decent detective would have gotten the “B” clue even without
knowing what she knew at that point.”

This
next one made me laugh out loud!!
This was one of the 2-star reviews on “Roll the
Dice”
“I am deleting this book from my Kindle, and admitting
that I couldn’t get beyond page one, simply because of the overt use of foul
language.”
Whaa!!! It’s a Suspense – and the book description
explains that sparks fly and the tough get tougher. A clue- right??