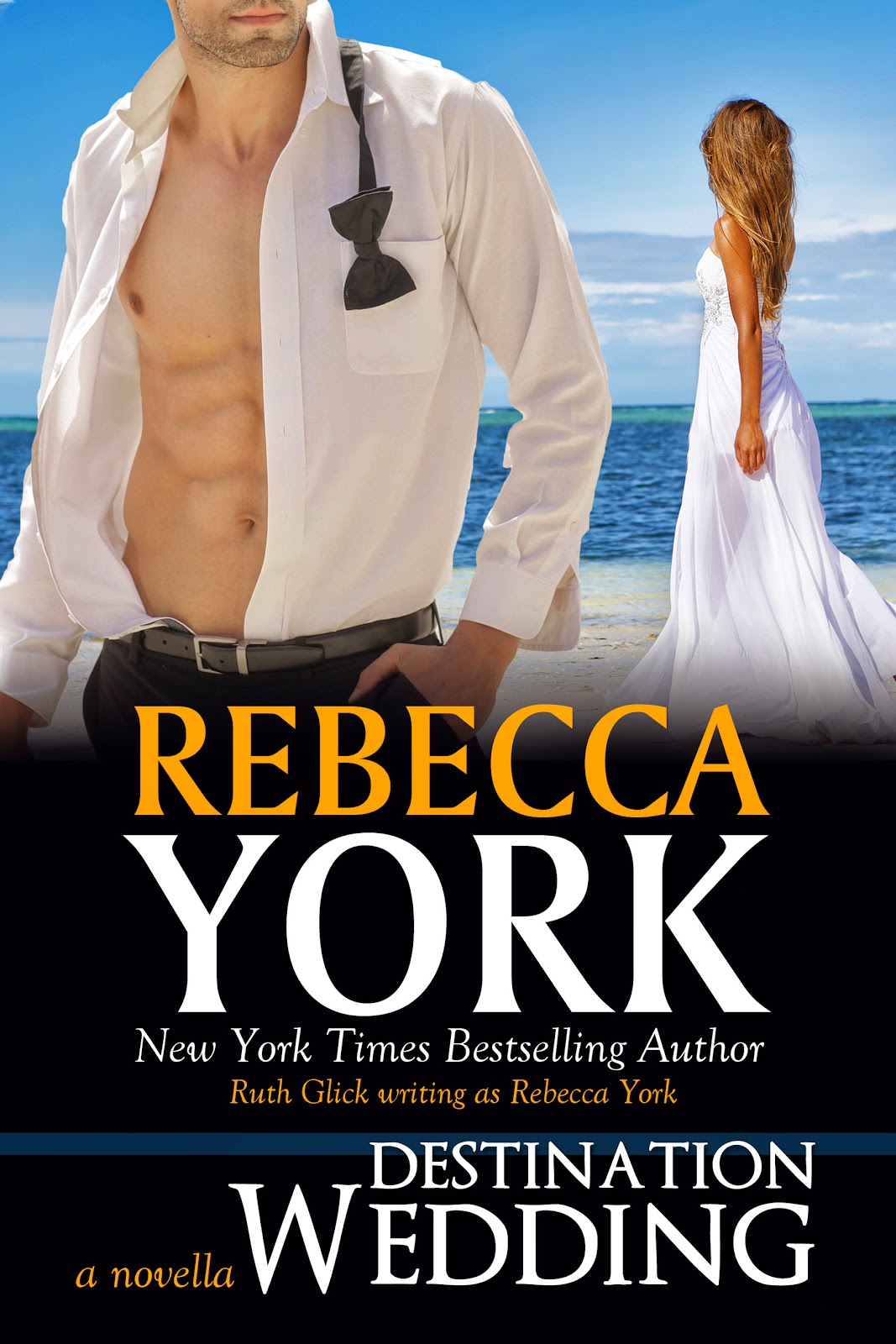 After a billionaire’s daughter, Camille Norland, is kidnapped by a Russian mobster bent on matrimony, Decorah Security agent Nick Cassidy is her best hope of rescue.  Nick’s never admitted his feelings for Camille. Now he’s desperate to save her before the wedding night. But can they escape from Victor Zanov’s heavily fortified island paradise?

“This is our chance for freedom. Nick Cassidy’s not on duty today.”

Camille Norland spun toward her younger sister, Eden, noting the hopeful look in her blue eyes. She was talking about one of the bodyguards their father had hired to keep the family safe. He’d been on the estate for six months—the worst six months of Camille’s twenty-five years.

The guy was brutally handsome with a hard body that would send any woman’s blood pressure shooting up. His lips looked hard, but she suspected that they would soften when they came down on hers. I mean, if you were going to pick a man for a romantic fling, he was it. She couldn’t help being attracted to him. And she knew for sure it was mutual, because of the way his gaze would flick quickly away when she caught him looking at her.

But working for Samuel Norland apparently meant that he wouldn’t get involved with Camille. It also meant he was an unbending son of a bitch. A stickler for procedure. If he thought it wasn’t safe to do something, you didn’t get to do it. You didn’t get to go swimming in the ocean. Or go into town for shopping or to a restaurant for lunch. You stayed on the Norland estate where you were bored out of your skull.

“Dad’s birthday is coming up next month,” Eden said, curling a strand of blond hair around her finger the way she did when she was trying to get her way. “I want to buy him something he’ll really like.”

Camille countered with a practical suggestion. “We can shop the Internet.”

Eden gave her a pained look. “If you want to be a good little duby and stay home looking at a computer screen, be my guest. But I’m going to a real mall with real merchandise. Bobby will take me.”

Camille sighed. Maybe the best thing to do was go along to keep her little sister from doing anything too outrageous.

Or really, what she should do was call Nick Cassidy.

Bobby Cunningham, blond, surfer cute, and eager to please, was new on the job, and Nick would tell him to keep them home. But then Eden would call Camille a squealer and give her the ice-cold treatment for weeks, which would make life even more unbearable.

Eden had already grabbed her purse. “We’ll be back before anybody knows.” For good measure, she added, “What’s the point of having gonzo bucks if you can’t have any fun?”

Camille nodded, thinking the lack of fun part was more true for her little sister than it was for herself. Eden had been born with a heart defect that had been repaired. But she’d never been in robust health, and Dad kept her protected like a piece of fine china wrapped in layers of tissue.

Plus, when Camille had been little, things had been more normal. She’d gone to some good private schools, then spent four glorious years away from home at Florida State, living the life of a regular college student. Well almost regular, until Mom had died, kicking dad into over protective mode.

Eden interrupted her thoughts. “I want to stop at that new jewelry store and look at gold chains. One of those thick ones would look great on Dad.”

“And he’d probably like one of the books on the New York Times nonfiction list,” Camille added, thinking he’d prefer reading material to jewelry, but there was no harm in getting both.

Still she felt a twinge of guilt as they climbed into the back of the Lincoln Town Car and headed for the iron gates that closed off the Norland estate from the rest of Longboat Key. Turning right, they headed for the mall.

“Relax,” Eden said as she reached into the refrigerator at the side of the passenger compartment and pulled out a Coke.

Camille crossed her long legs and leaned back in the plush leather seat, taking in her sister’s impish face, hoping they could keep the trip short.

Looking toward the front of the car, she saw Bobby dividing his attention between the road ahead and the rearview mirror.

“No,” he answered. “Just being cautious.”

She couldn’t help thinking about Nick again. If you were going to leave the estate, he’d be better protection than Bobby. Only, with Nick, they wouldn’t be here at all.

The mall parking lot was crowded, and Bobby wouldn’t drop them off at the door. Instead he drove up and down the rows and finally found a space half a block from the entrance.

A few seconds after they got out, a van pulled up in the lane behind them. Then another one materialized in front, blocking them in.

Bobby drew his gun and spun around, as four tough-looking guys converged on them. One slammed him to the ground.

Another shoved Eden aside. And a third reached for Camille. Before she had time to scream, something cold and wet came down over her face, and her vision instantly went wonky. As she slipped to the blacktop, two of the men grabbed her and dragged her away.

Nick Cassidy got the emergency call when he was already on his way back to the Norland estate. He’d had the day off, and he’d thought he’d relax at a shooting range.

After an hour of practice with his Sig, where he’d topped his previous score, he’d gone to lunch at a little deli overlooking one of Florida’s million lakes. As he ate a pastrami sandwich on the shaded patio, he thought about asking Frank Decorah for a change of assignment.

The Norland job would have been a good one—if he and Camille hadn’t set off sexual sparks when they were together, an unfortunate situation when you had to keep your emotions under control. And then there was the other daughter—Eden. She and Camille looked a lot alike, but the only thing he felt for her was annoyance that she was constantly bending rules and testing limits.

When his phone rang, he pressed the talk button on the steering wheel.

“Thank Christ I got you.”

“What?” Nick demanded, instantly on the alert.

Nick could hear Bobby gulp. “No. Eden asked me to take them shopping—to the mall.”

Nick wanted to order them home, but he needed Bobby to show him where the attack had happened.

“If you haven’t gotten her into the freaking car and locked the doors, do it,” Nick bit out as he pulled into the parking lot of a strip mall and made a U- turn. He didn’t waste the energy telling Bobby what a stupid shit he’d been. He simply sped toward the shopping center, asking for details as he drove.

“Do we call the cops?” Bobby asked.

“According to our instructions, that’s up to Norland,” Nick answered.

Camille drifted in a comforting dream. She clung to it because she instinctively knew that if she allowed herself to wake, she wouldn’t be able to cope with her current reality.

Sinking deeper into sleep, she snuggled more tightly into a man’s powerful arms and knew that it was Nick Cassidy holding her. She didn’t open her eyes and look at him, but she caught the familiar citrus scent of his aftershave and felt the well-toned muscles of his hard body.

“Finally,” she whispered. “You finally came to me. What changed your mind?”

“I had to,” he answered in a thick voice.

She snuggled closer, pleased by the desperation she heard.

“We both know this is wrong,” he said. “I work for your father. I can’t be intimate with his daughter.”

The rough way he said the word “intimate” sent a hot chill skittering over her skin.

“If you weren’t working for my father, we never would have met—and been attracted to each other.”

He made a sound of acknowledgment deep in his chest, a sound she took for surrender.

She cupped her hands around the back of his head, bringing his lips to hers, wordlessly telling him that they belonged together. The brush of her mouth against his was like the completion of an electric circuit, the power flowing from him to her as he took command, his mouth ravaging hers in an act of pure passion. She opened for him, welcoming the invasion of his tongue, the touch of his hands as they stroked and caressed her. Finally, after all these months of circling each other like dancers in a stylized ritual, he was going to make love with her.

She rolled to her back, giving him access to her body, waiting for one of his hands to claim her breasts and the other to slide downward into the hot core of her. For a charged moment, he hovered over her.

Then to her utter disappointment, he pulled away. When she reached for him, she grabbed only cool air, and she knew he had never really been there at all.

She wanted to sob out his name, but she understood that calling to him in this place would be dangerous.

Included in the Ten Brides for Ten Heroes anthology, which is no longer available, Destination Wedding is being released for the first time as its own.

“A New York Times, USA Today, and Publishers Weekly best-selling and award-winning author, Rebecca has written over 145 books and novellas. In 2011 she became the dozenth author to receive the Romance Writers of America Centennial Award for having written 100 romantic novels. Her Killing Moon was a launch title for Berkley’s Sensation imprint in June 2003. Five more books in the series have followed.