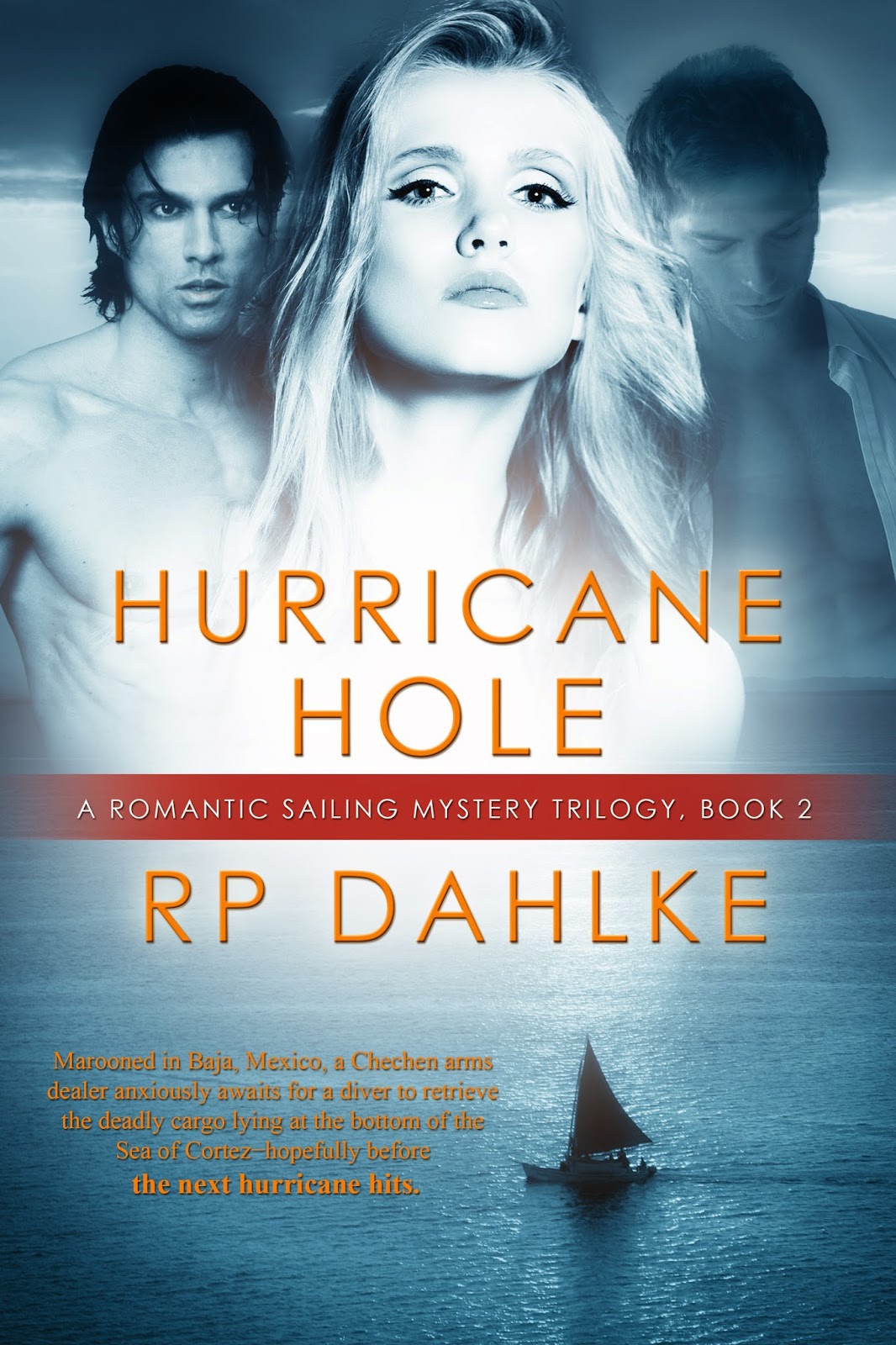 Back Page Blurb:
Marooned in Baja, Mexico, a Chechen arms dealer is
waiting for the right diver to retrieve the deadly cargo on the bottom of the
Sea of Cortez. But when the Queen of daytime drama, Leila Hunter Standiford,
happens to admire a beautiful vintage Alden and it’s handsome captain, she
doesn’t realize that the boat will soon burn to the water line, or that a dead
body will be found below, or that the captain has been targeted as a
sacrificial diver.
AMAZON US  AMAZON UK  UNIVERSAL
Five-star review (1 of 45)
***** It Just Keeps Getting More Exciting!
By Lesley A. Diehl
Format:Kindle Edition
Hurricane Hole is the second book in Dahlke’s sailing trilogy. Like her other books, she brings to the reader a compelling protagonist, the kind of woman men love and the kind of woman women would love to be. Leila is beautiful, smart, sexy and likeable. When she meets Ari, the two are drawn to one another, but the secrets each holds may tear apart their relationship. Dahlke has an unique ability to develop characters, good and bad, that are more than stereotypes. I’ve come to love Gabe, the bad good boy or is it good bad guy who makes Leila’s life aboard somewhat of a challenge.

As with the first book in the sailing trilogy she draws on her own cruising experience to make the backdrop of the book a sailing community in Mexico. There’s enough sophisticated sailing information to make the seasoned mariner like the read, but not so much that someone without that knowledge is bored.

Who can’t relate to warm blue waters and sunny skies, but the search for a killer is made tenser by the impending hurricane that threatens this paradise. Dahlke then ups the ante by plunging her heroine and hunky, sexy hero into the churning waters of the storm.

This is an entertaining, exciting read with just enough romance to make your toes curl and enough action to keep you up all night reading it.

Chapter One
With negotiations for her contract at All My Tomorrows on spin cycle, Leila Hunter Standiford figured a week in sunny Mexico on the family sailboat would be just the thing she needed to soothe her jittery nerves. Besides, her sister was already aboard and the boat was docked in a swanky Ensenada marina. They could shop, swim, or lounge by the pool and drink margaritas. Her decision made, she threw a few items in a tote bag and hopped on a plane.
Even though her sister had been glad to see Leila, Katy Hunter was already making arrangements to go back to her job in San Francisco.
Home was not on Leila’s agenda. Go back to L.A. so she could fidget while her producers dithered over her contract? What if they didn’t give her the raise? What if they refused to sign the contract? What if her only movie deals were for supporting roles as somebody’s mother? All she needed was a little shadowing along the planes of her face, and anyone would think she was fifty instead of thirty-eight.
No. She wouldn’t go back. Not yet. Not when she had sun and sea and a boat to enjoy. She needed this vacation, and if Katy wasn’t going to use the boat, then she would. She’d take a week, maybe two, sail down to Cabo. So what if she hadn’t handled a boat for a few years? Gabe Alexander, who had lived south of the border for the last twenty years, said he’d help her sail. Even after Katy filled her in about his history, Leila thought him funny and charming, and besides, he offered to do the cooking. So, continuing in a long line of impetuous moves, she invited him along.
Now, after ten days cooped up in her small Westsail, they were on the east side of Baja, anchored in the bay of Puerto Felice. Leila had every expectation that Gabe would willingly find another place to stay, get a job, a life, anything, as long as she could move the boat into a marina and make arrangements to have it trucked home. But Gabe was procrastinating, probably because he didn’t have the requisite passport.
With her frustration level rising, she stomped off to where the cruising fleet’s dinghies were tethered like restless ponies.
Gabe, following behind her, grumbled something unintelligible.
Leila stopped mid-stride, anger rippling across her beautiful features. “I did all the grocery shopping so you could buy some decent clothes, and you come back with a shirt that smells like diesel?”
He lifted the collar and sniffed. “I guess the guy stowed them in his bilge. Did I tell you he sailed all the way from Hawaii in his catamaran?”
“And all he had left was the one shirt that screamed tourist?”
“Hey! I look good in this shirt. The color brings out the aqua in my eyes.”
But attention was the last thing he needed, and they both knew it.
RP Dahlke contacts:
Website
Facebook
Twitter
~
~