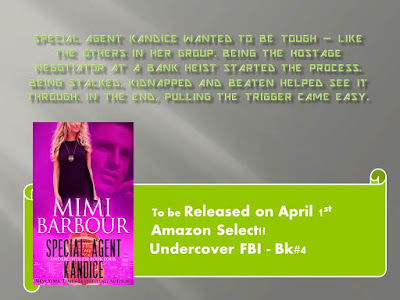 I’m getting excited because I’ll be releasing
Special Agent Kandice in a few days – April 1st.You’d think that after all the
books I’ve put out there, I would have gotten over this tense, giddy-stomach
kinda feeling but I admit that – nope – it’s still there.
This is the point where I’m always a bit frazzled.
Those of you who are Indie authors, well you know the never-ending chores
needed to be done when you get to this point. I have this mental list that
seems overpowering, and as I tick each thing off, I know there’s still a lot
more – prompting the book being the biggest hurdle to cross.
For instance, I decided with this book to give away
a couple of paperbacks on Goodreads. It will give the book exposure and
hopefully bring attention to the fact that it’s the 4th in the
series. So, being the pro that I am, and having done this before, though quite
some time ago, I beetle my butt over to the Goodreads’ Giveaway page and get
totally stuck there.
First of all, I’ve never done this promo on a book
not already released before. It makes a difference… YEP!!
So after I filled in the form, they stopped me dead
and kicked me out (metaphorically speaking). Their excuse was – using an
invalid ISBN#. Well… hell’s bells. How would they know it was invalid – see my
head was planted firmly up my…ahh ahem! Anyway, duh! It finally dawned on me –
after I broke down and wrote to a friend on
a loop about the situation (darn)
– that if I hadn’t set the book up yet, of course the number would be invalid.
Plus, I couldn’t find any place to add the cover and
well… all the other ads had covers – I wanted mine there too…right? So easy
once I had the answer.
I did get one benefit from this little trip back
down “newbie” lane…
It means we can set our books up on Goodreads before
they’re released!! I forced open my inner data base and lodged that into the
already over-extended brain that I keep feeding more stuff every day.
Steps
to set up unpublished book on Goodreads:
Go to your Goodreads Dashboard
See – Add a book – click and fill in form. (make
sure where it says book format – put paperback or when you try to list this
book as a Giveaway – it will kick your cute little petoodie right outta there
(happened 3 times to me before I caught on……..ackkkk!!!)
Go to top of page and see browse and then click on
Giveaways.
On right, see list a giveaway.
Fill in form with the same ISBN# you set up the book
with or it will kick you out and you have to start all over again. Also, make
sure you choose a start date at least 7 days in advance or again – oh yeah!! It’ll
kick you out. In fact, my strong suggestion is to keep a copy of the info for this
form as you might have to use it over and over and over and…..grrr!!
Now in case you wondered why I wrote this blog, it’s
as much for me as it is for you. Next time I have to go through this procedure,
I want step-by-step instructions so I don’t waste my whole afternoon :-))
Here’s the page of Giveaways as of today…of course Special Agent Kandice won’t show up there for 7 days but at least, after my herculean efforts, it will appear!!
Next blog – other things to do before releasing a
new book.