Hello my friends….I have great news!

For the first time since I’ve become an author, one of my books is up for an award!!!

i Book Buzz, a monthly club of writers and readers accepts submissions each month from a different genre and then choose five books as their finalists. These books are listed and must be voted on in order to pick the winner who will be honoured to be Book of the Month.

“My Cheeky Angel” has been chose as one of the five paranormal books for this month and I really need your vote. (I’m quite far behind the others! sob!)

So….if you’d like to see a cheeky angel get to first place,  please vote here at  iBookBuzz
First sign in by clicking on the home button and leaving your e-mail address and then click the circle next to My Cheeky Angel.

Thank you so much….I really do appreciate the support!!

Thank you for visiting my blogsite and welcome to the Gratitude Giveaway Blog Hop!
If you leave me your E-mail address and a comment telling me what you want from Santa this year, two lucky winners will win an e-book copy of my new release on November 25th

**Together for Christmas – paperback is now available at Wild Rose Press / Amazon / The e-book will be released November 25th. 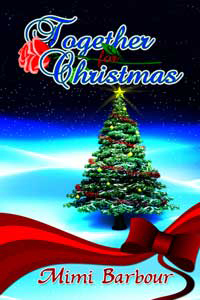 Abbie Taylor has a thousand things to do before the big day, help the vicar with his needy families, organize the Christmas nativity, and spare time for a distraught baby at the orphanage who only settles when she’s near. Falling into a coma while her spirit resides inside a prickly, big shot businessman doesn’t work for her at all …until she falls in love.

Excerpt #2
“You’re having a breakdown? Now you listen ere, Mate. It ain’t you lying in a heap in the snow. And it darn well ain’t you imprisoned in another’s body, is it? Don’t you dare try and leave me here.”
Even if he wanted to, there was an unseen force holding him back. Stopping him from moving. And however unlikely, the girl certainly sounded real. Considering she was a figment of his imagination that is.
“Would you stop that! I’m not a figment of anyone’s imagination. I’m a real girl,” she wailed. Then she added. “Cor, I sound like the female version of Pinocchio.” When she giggled, hysteria became evident.
“Okay, stop that screeching. I’ll take you with me.” If this really was a dream, then he could play hero, even though he was far from hero material. Blast, how could a boring workaholic accountant such as himself get caught up in such a crazy nightmare?
Slight as she’d looked earlier, she felt solid to him now, and in his weakened condition he knew he couldn’t go very far. Scooped in his arms, her body rolled towards him as if seeking protection. His arms cradled her against his chest, and she seemed to fit. Strange. He’d never carried anyone before. He kind of liked how it made him feel.
He looked down and then lowered his chin so he could blow the snow from her features. Light from the lamp above angled over her, and he saw a small heart-shaped face, pale and pretty with lips plump and turning slightly blue.
“See? I’m a girl.”
“Yes, I can see that now. Don’t worry. I’ll take care of you.”
He stumbled out from behind the bench, stopped and turned in both directions. The snow, falling even harder now, seemed to have effectively cleared the roads from traffic, both vehicular and human. No buses or taxis, no police or helpful pedestrians.
Again the lights from the vicarage drew his attention. The path, only slightly visible, wound through the gardens and looked to be a mile when in truth he knew it to be only a couple hundred feet. Switching his romantic hold to that of firemen enabled him to keep one arm free as he headed in the right direction.
“I’m glad you’ve decided to go to the vicar. He’s my boss you know, and a lovely chap. He’ll know what to do, I’m sure.”
“I don’t believe we should talk to anyone about your—ahh—switching residences, so to speak. I mean, think about it. Would you accept such a thing? More than likely, they’ll stick me in a rubber room and throw away the key.”
“So, what do you propose we say about my unconscious body?” Strange how he not only heard the irritation, he felt her worry.
“I’ll tell him you stumbled and hit your head. We’ll call an ambulance and get you taken to the hospital where the doctors can make an examination. That outta do it.” Proud of his suggestion, he ignored her rude snort. Until she snorted the second time.
“What??”
“Have you looked around at all? There is no traffic. The roads look to be impassable. I’m afraid the storm is getting worse.”
She had a point. The snow had intensified until visibility became almost non-existent. Without the foliage that had protected the biggest portion of this walkway from the blowing snow, he’d never be able to move so easily.
“This is an emergency, they have to make it.”
“Pray God you’re right.” It was the sob that tore at the walls around his heart. A tiny sob, but with enough power to start the first fissure.