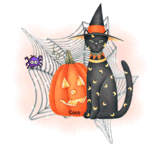 TBR will be choosing 13 winners who will be announced on November 1st. To connect with the contest click   HERE!

Night Owl Reviews also has a contest – click the ad on side panel to enter!

I remember (in ancient times – ahem!) when I was a child in Winnipeg, Halloween was the day us kids would hurry home from school in a panic to get our costumes organized. Back in “the good old days” my mom used to get a bunch of old clothes out from the closet and my sister and I would fight and scramble to get the pieces that would best fit our vision of whatever witch or old man our mom had dictated as our choices for that year. The money was never there to buy costumes like most folks do today, never thought it was necessary when there was always cardboard, old clothes and paint or whatever else we needed to make up something that would ensure us our ultimate goal – that of getting as much candy as possible.

As the light waned, we’d watch out the window, prancing from foot to foot, praying that the streetlights would come on soon. It was our sign – now was time. Mom would give us each a pillow-slip and some gloves (Winnipeg right??) and we’d be off to join hordes of other goblins all racing to and fro to get their anticipated cache.

Up and down the streets childish voice yelled Halloween Apples??!! Little ones in the care of older brothers and sisters were dragged along, forced to keep up because there were only so many houses in the neighbourhood that would give away candy apples as reimbursement for singing a song. And everyone on our street had practised their song knowing that the reward far outstripped the effort.

Soon we’d have to drop off the first load at the house because the pillowcases half full of apples would be heavier than we could manage, and mom would have warned us that she would be running out and would need reinforcements from our precious supply before the night was over. At first, we always begrudged this necessity, but after stuffing our faces with as much junk as we could force down, it didn’t seem to be so painful to let her pass some of it back out again.

Finally by the end of the evening—we’d stick it out as long as there were lights on in front doors and our frozen fingers and toes could stand the cold—we’d head home to peruse our catch and gloat about the candy we’d stuffed into pockets, hoping that sharp motherly eyes wouldn’t see the bulges.

Because we so seldom had candy, parents in those days knew that the best way to handle this bounty was to pass out daily treats in order to make it last. Funny thing is, by the end of the week, we’d run out. Always wondered how that could happen. Of course, today I know exactly where the stuff went. Darn sneaky parents!!

An excerpt from My Cheeky Angel isavailable here.