I wrote this story because I wanted to share a favourite memory of Africa with you that I’ll never forget. Myself, and a carload of women were driving back to our homes from a marketplace in Kamsar, Guinea when I spotted a small boychild—totally naked—running through a downpour while kicking a semi-inflated soccer ball. He was laughing. Not chuckling – he laughed so hard his small frame shook all over as the rain drenched him. His baby-like body moved fluidly this way and that, trying to control the crooked, half-filled toy, and the joy in his face brought tears to my eyes. I couldn’t reach for my camera even though the image was priceless. I didn’t want to miss one second as we drove slowly past. 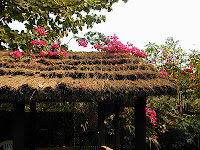 Run for Joy started to fester in my brain at that moment and it wasn’t until years later that I actually had the story published in a multicultural magazine called Skipping Stones.

I’d like to share it with you now, because if you believe in the human spirit being filled with love and joy when we are children, then you’ll understand the overwhelming need I felt to write a story for this boy.

Keita is unhappy and listless. For the last few days all he has done is sit and clutch the old soccer ball, his only possession. In the straw-covered “piute,” he prays for a little breeze through the open sides, but it doesn’t happen. He looks over the red, clay-like, sun-bleached dirt and the greying weeds, and he waits. He knows any day now the rains will come.

His keepers, people he is forced to live with since he lost his own family, yell at him and force him outside.

“Go and run, boy,” they say, wanting their space. “Play with the other children, don’t hide in here.”

Curled up like a lazy kitten, he tries to make his thin, lanky body vanish, but it doesn’t help. Swats on his backside convince him to leave the spot. He takes up the same position on the outer walls where the shade not only keeps the sun from his body, but also keeps him hidden. Limply, he settles like a mound of old cloth.

Hearing his name called by the voice of the only person who has ever shown him any respect or affection brings him instantly to his feet. His Madame, the giver of the cherished ball has need of him. She is his only experience of love. Sometime she pats his head, holds his hand and even hugs and kisses him hello. 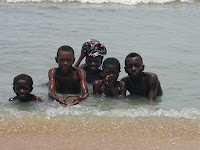 For the small jobs he does for her there is always water and food at her gate. He knows that her treats of bread, jam, fruit and occasionally cookies are what keep him strong. Once, for a special occasion, she even gave him a soda. He almost choked from drinking it so fast. Afterwards, he spent so much time bragging about it that the other boys in the village started to tease him and call him Keita-cola. He didn’t care. They had never tasted one and he had.

He runs toward her voice and finds her at the edge of the village. She is calling him to come and help her take her dog for a walk. She has told him that she feels very safe with him and Oma, her big black African dog. Keita hides his fear of this huge monster, but the animal senses it anyway. With a snarling grin on his snout, he stares at Keita. Clearly a warning! Madame shushes her pet with a pat on his side and in an instant the animal changes from fierceness to loving silliness. Both boy and dog have a shared affection for this woman, which binds them as long as she is there.

It has been a long time since she’s touched Keita, he notices as she touches her dog. He knows why. Everyone knows. The “Fotays,” meaning white people, dislike the smell of the African body. Why that is he doesn’t understand, but everyone knows it to be true.

Anyone who is hired to work with the Fotays, such as a houseboy or guard, is made to shower before he can start his work. All the white people have showers both inside and outside their houses. The outside showers, of course, are built specially for “their boys.”

The river is so far away that he cannot go there and back without having his body become so sweaty that it defeats the purpose. Using well water for anything but the greatest necessities would bring him a beating. He just goes about as everyone else in his village. 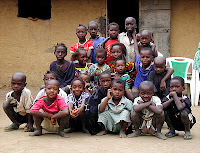 Keita’s Madame hasn’t hugged him for a very long time and he yearns for her gentle embrace. Soon, when the rains come, he knows he will be clean again.

Praise be to God! The very next day his wish is granted. The rains are back. His joy is huge. Grinning, brimming over with happiness, he strips off his tattered faded shorts and his grubby torn T-shirt and he runs.

Thank goodness for memories such as these. If you have any you’d like to share, please do.
~
~