These giveaways are such fun to enter and the authors involved
thank you, the readers, so very much!
~*~*~
To show you my personal appreciation,
I’ve decided to give you a glimpse into
the 1st book in my new Mob Tracker Series called
“Sweet Retaliation”.
I’ve been sitting on this novel, not releasing it until Book #2
“Sweet Justice”
is ready to publish so you won’t have too long a wait
for the second story of Cassidy Santino.
This is the final Cover… revealed here. 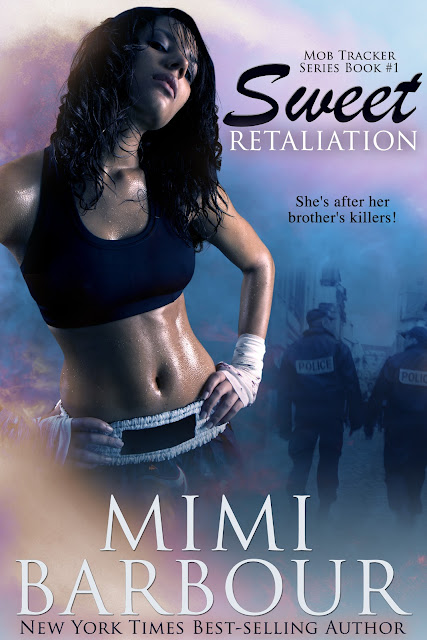 Excerpt – Chapter One:
What the hell was she doing following her brother, especially at night? Cassidy Santino didn’t do darkness. Not in the slums of a city like Las Vegas when, molasses thick, it threatened and terrified.
Gagging, sweating, she’d reached the end of her backbone. Thoughts of giving up and retreating gobbled up the small amount of bravery still hanging on by a thread, making her hesitate. Then worry for her twin, Raoul, kicked in.
Biting her lip, she eased forward so she could see around the rickety fence into the semi-lit alley behind a big warehouse. A group of men milled about in a circle. Two of them were head-to-head in a heated discussion. Adrenalin kicked in when she saw her brother step out of the circle.
Raoul’s shoulders were hunched in the same way he’d hold himself when their father had intimidated him as a boy. She watched him flinch and start to turn away. Then the man he’d been arguing with let out a bellow, backhanded him across the face and shoved hard. Before she could get her bewildered brain to accept the incident, Raoul went down and the other men crowded in and began kicking him.
No! Stop!
Her mind screamed the words, but her voice didn’t connect. It froze. When she opened her mouth fear struck her mute. Though she tried to release her rage, to force sound past the blockage in her throat, not even a peep escaped. She’d never felt so useless in all her sad, ineffectual years. Forcing her limbs to move, she fell forward onto her knees but couldn’t get her leg muscles to function.
Infuriating seconds ticked by as she watched the men work her brother over like he was a soccer ball, rather than a human being.
God! Please…
Movement, shuffling, a voice called out from another direction. “Police. Stop what you’re doing and back away. Get your hands up. Do it now!”
Thank you, Lord! Confidence arrived with the authorities, and Cassi felt a flood of energy. Springing to her feet, she started forward. Before she went two steps, one of the assailants stepped over to Raoul, extended his arm and a gunshot changed the rest of her life. She heard her twin grunt and saw his body jerk.
“No!”
Fear vanished under her instinctive urgency to get to Raoul. She ran. To help him, save him, give up her life for him. He was all she had in the world, the only one who mattered.
Blinded by grief, unaware of the loud gunplay going on around her, she fell to her knees next to his lifeless form. Before she had a chance to understand the danger, a man dashed out, swept her to the side and covered her with his own body.
“Keep down.” Rough, his hands hurting, he pushed her head under his chest while she wiggled to get back to Raoul. “Stop it. You’ll get us both killed.” His voice, hard and angry drew her attention. She shook away from his hand and looked at him, trying to explain that the injured man was her brother and he needed help. When their eyes met, the bit of light from the building’s illumination revealed his face.
Deep blue eyes, encircled with a dark outer ring of pure determination, penetrated for an instant, an order clear and visible that only a man in command could produce. Compelled to obey, but overridden by her need to get to Raoul, she kept pushing at him, until she felt him jerk and heard his grunt of pain.
One of those monsters had shot her rescuer. Disbelief overwhelmed and in seconds the relentless fear returned. Imprisoned and helpless, the horror of the moment clawed at her sanity. Surrendering to its magnetic lure, darkness claimed her and she knew no more.
To be released April 15, 2017
On pre-order soon!!
~*~*~