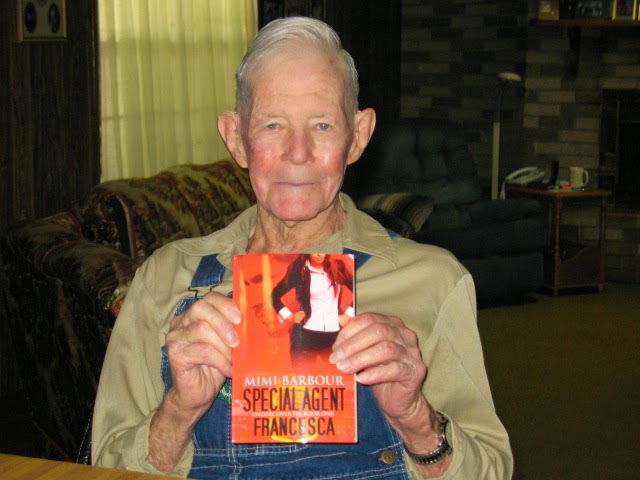 I received this e-mail on March 10th and if you say I was pleased, well that would be the understatement of all times. I was simply ecstatic!
My dad will be 100 years on April 15th and he is one of your biggest fans and probably the oldest. He loved your Vegas series and is looking forward to your Undercover FBI series.  He says he hopes you write fast because he knows it will be a great series and he looks forward to reading it but at his age he doesn’t even buy green bananas anymore. He has a great sense of humor and is still in great shape and has a very sharp mind for someone his age. I would like to ask you if at all possible could you send him a note, card or whatever for his birthday.  I want to give him a big surprise and a note or card from you would do that.
L
As you can imagine, I had plans to send Norris his birthday card until I came up with something a whole lot better.


Just a month earlier, I was involved in the London Book Fair with a bunch of other authors from the Freepartay group. We needed to have actual books to give out to publishers and agents. So… I had been forced to overcome my childish qualms about dealing with the pitfalls on Createspace, and get my book “Together Again” published.

You see, some years back it had been a nightmare for me trying to get “My Cheeky Angel” published there. Rather than dealing with the situation and learning how to do it right, like any card-carrying techie wuss, I backed off and decided e-books were just fine. Who needed a paperback anyway? They were going out of style in the next twenty years–right? So, no one would even care. (Well – except for my mom, but that’s another story.)

Move forward to the Fair and now I had no choice. I needed a paperback to promote in London. So, I girded my loins (whatever that means:-) and I forged ahead. Much to my surprise, either the site had been upgraded or my brain had, but I found it relatively simple and voilà! I had me a real live paperback.
Since “Special Agent Francesca“ was ready for releasing on Amazon, I quickly wrote a note to Norris as my dedication. Thanks to my wonderful formatter, I had enough time to get the story published on Createspace (I’m such a pro!!!) and rather than sending him a card, I sent him a copy of the book for his birthday.
Dedication:
I want to dedicate this book to my oldest and most adored reader, Norris Smith. Recently, his family notified me to share that he would be celebrating his 100th birthday in April and that he loved my Vegas Series and hope I’d be releasing the first of the Undercover FBI series soon. Excerpt from the letter – “He says he hopes you write fast because he knows it will be a great series and he looks forward to reading it but at his age he doesn’t even buy green bananas anymore.”
My first reaction was ahhh! Then I laughed. Finally, it dawned on me what a wonder it was to have someone of his years enjoy a book I created. Obviously this very wise man knows good quality story-telling when he sees it!!!
Happy Birthday, Norris
A big mushy hug from your friend, Mimi.

Much to my delight, Norris’s daughter sent me a picture of him holding my book. With his permission, I just had to share.

Thank you so much for the book you sent my dad for his birthday. Dedicating the book to him was just over the top.  He got the biggest kick out of you using his green bananas story.  He was laughing so hard he had to stop reading.  He received the book Monday and has already finished reading it.  He said it was a real “barn burner.”  I’m sending you a photo I took of him this morning when he was officially 100 years old. I can never thank you enough for making this birthday so special for him.
Lucille
***This experience will be a pinnacle in my career as an author. Thank you, Norris. As far as I’m concerned, it just doesn’t get much sweeter!! 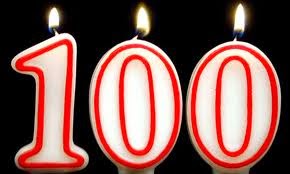