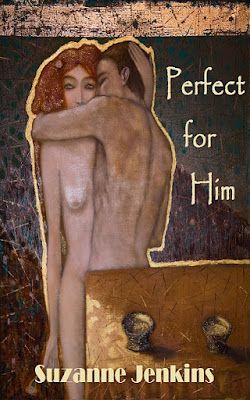 Perfect
for Him Excerpt
That night as she undressed, she felt strong enough
to look at her wound. Following her usual routine, she took a shower without
looking in the mirror. But when she got out, she changed her normal procedure
and stood at her sink. A mirror ran the length of the wall, and as she prepared
to examine her body for the first time post-surgery, she began by looking at
the survivor. Trying to look at her breast as she would her arm or her nose was
impossible; breasts were icons of worship. Women went to great lengths to make
them larger and perkier. After a certain age, they gladly submitted to torture
to keep their breasts safe by having a yearly mammogram. Gradually, she moved
her eyes across to the other side, the affected side. It wasn’t as bad as she
feared.
Andy did a nice job; left behind, a slender pink
thread traveling from the right side of her sternum diagonally across her chest
to almost her side. She disliked referring to it as a wound or a scar, chest
was probably more appropriate, but so androgynous. She wanted a word that would
describe where my breast used to be.
Later that night, she told Jason about looking and
surviving the experience. She hated that she didn’t have a word for what was
left behind.
“Are you ready to show me your booby?” he whispered.
She put her hand to her mouth and giggled. Jason loved her; he’d been serious
when she needed it, and jovial when she longed for it, after everything she’d
gone through. Continuing to try to keep akin to her lead, he must have felt she
needed levity right then. And by referring to what was still there, it took the
focus off what was missing.
“Booby?” she asked, shy.
“You know. I haven’t seen it for a while.”
“I guess I can show you,” she said, nervous,
frightened. She knew him well. His response now had more power than she should
allow it to have, but he was her husband. Jason’s reaction could make it or
break it for her. They stood apart from each other and she reached up to
unbutton her pajama top. She pulled her left arm out first, carefully guiding
her right arm out of the sleeve, gently because it was still sore from the
lymph node dissection. He didn’t’ reach out to help her, watching her undress.
It was an act of his will, letting her do it alone.
“Unhooking my bra is still a little tough,” she
said, reaching behind. She let the straps fall down her arms, the right cup
weighted down by the prosthesis fell to her waist. Harley watched
Jason’s eyes, his facial muscles stiffening as his
eyes stayed focused on the right side of her chest, where a nice round breast
used to be. Flushed, the color worked its way up his neck and over his
cheekbones, his black hair shining, one lock over his forehead giving him the
appearance of a young boy. He grasped the bra and threw it on the bed, falling
to his knees; he buried his face in her midriff. His body began to shake and
she knew then, he was brokenhearted.
That night, they made love again for the first time
in weeks, and Harley let him kiss the place where there was once a breast.
****
This beautiful book is part of the collection called
A Touch of Passion (99cents) 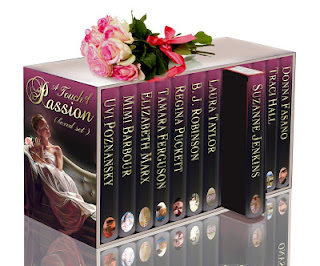