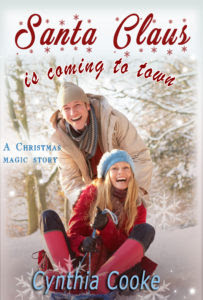 What happens when a big city girl reunites with a small town boy – magic.

When the boy is the town Santa in need of an elf – Christmas Magic.

Going Home for Christmas – Four little words that can cause loads of excitement and anxiety all rolled into one. That bundle of emotions is what I wanted to capture in the Christmas novella – Santa Claus Is Coming To Town. Not only does our big city career woman, Nicole have to deal with her guilt over not coming home to visit her dad for so long, but her anxiety over putting her work life on hold to do it. So many times she has put what’s really important on the back burner just until she could finish that next project. But this time, Nicole doesn’t have a choice. When her father takes a fall, she must go home and take care of him.

“Where is he now?” Nicole asked, horrified by the image of her father lying on the ground amidst the broken branches and waxy petals.

“At Mercy Hospital. You should come home.”

Nicole’s gaze immediately shot to the stack of papers strewn across her desk. Her dad needed her. She was all he had. A no-brainer. So why wasn’t she moving? Or breathing?

“Yes, I will. I’ll be there as soon as I can.” She stood, staring at her desk, trying to decide what to take, and what to leave.

“Good. They’re releasing him this evening, and they need someone to stay with him for the next twenty-four hours.”

Mary Margaret’s voice softened. “It sure will be nice to see you again, sweetheart. It’s been way too long.”


“It has,” Nicole said absently, trying to remember exactly how long. She hung up the phone. The snow falling outside changed from a picturesque fluttering to a harried flurry.

She grabbed the bulk of the files along with her laptop and dropped them into her briefcase before heading out the door; all the while, praying her father was okay.

And that he had Wi-Fi.

But we all know once we go home for the holidays, it’s almost like stepping through a time portal. All those memories and emotions from days gone by come flooding back. And for Nicole, they were the ones with the handsome guy next door who broke her heart and seems to always be around, underfoot, and working his way back into her heart.

She started to climb the ladder, but her snow-laden boot slipped on the second rung and sent her falling backwards.

She exhaled in relief as she leaned back into his strong chest, her face inches from his, and all she saw were the deep green pools of his eyes. All she felt were his strong arms slipping around her, and then he was kissing her. His lips on hers, warm and soft. Her heartbeat accelerated, and she stepped to the ground, pivoting so she could wrap her arms around his neck and pull him close. His tongue slipped into her mouth, and pleasure shot through her. A small moan rose in her throat, but just as she started to lose herself in his kiss, he pulled back and let her go. “I’m sorry.”

And once he takes over as the town Santa? Then there is no going back. He needs her help and he’s won’t take no for an answer. Now suddenly the career girl who doesn’t have time for Christmas is none other than Santa’s elf. And the magic has only begun.

Yes, the holidays can be filled with caroling and baking, sharing gifts and stealing kisses under the mistletoe, but most of all it is for making new memories and cherishing the old ones. So hold onto the magic, and don’t ever let it go.

Santa Claus Is Coming To Town is one of the twenty stories in the Love, Christmas boxed set. This book will only be published in this collection so get your copy now! 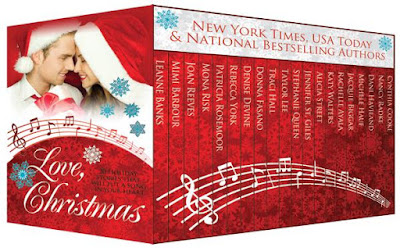