***I’m so happy  to be able to host Mary J. Forbes on my blog today. This woman is a multi-published author with Harlequin and has a huge selections of books listed here. After I had read her wonderful story, Home Secrets (see my review) and enjoyed it so thoroughly, I knew you’d all like to meet her as well. Her writing is excellent and the work professional in every way which made the novel such a delight to read. 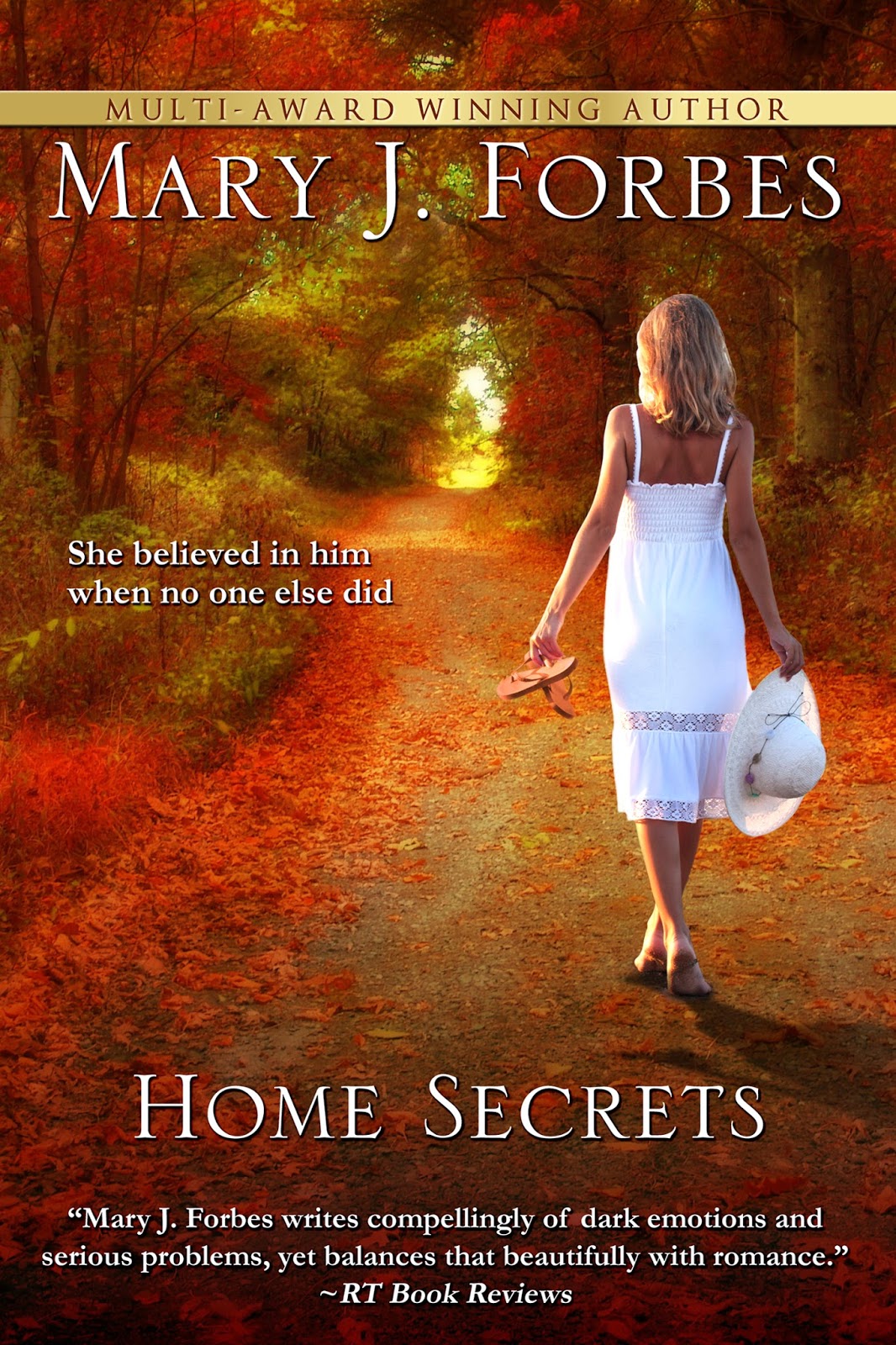 Mimi, thank you for inviting me to be a guest on Believe. I’m honored to be able to talk
to your readers and followers about my first “bigger” book, Home Secrets. By bigger, I mean longer
and more involved than my contemporary romances published by Harlequin.
Although Home
Secrets began as a contemporary romance, it soon evolved into a woman’s
fiction romance—as I see it—when three characters vied to have their say in the
book: Lily, Joy and Sydnie Rose. The more I dug into their histories and lives,
the harder their questions to me, their creator, became…

“How am I
supposed to stop my ex from making our daughter unhappy?” Lily asked. Her battle
cry became mine, and I fought at her side in every one of her scenes. She made
me cry and laugh and cry again. Until she found the path leading home, the one
that had both of us smiling and smiling…

Then Joy piped up and said, “You’ve given me rough row
to hoe. Is that fair?” Well, no, it probably wasn’t, but I was writing a Bigger
Book and I wanted Big Secretive Issues. Joy was strong of heart, I knew. She
could handle this one.

Sydnie Rose, youngest of the three, hung back
initially. Until she met Lily’s hero, Grey. Suddenly, Sydnie Rose saw her life twisting
beyond her reach with her father at the helm. “How can I get out and make this
right?” she said, stamping her foot. She had the sort of gumption that caught
me by surprise.

And when I wrote The End, I knew Home Secrets was the beginning of a series. The first of the kind
of books I want to write with characters who ask difficult questions—and are
not afraid of the answers I give them.
Blurb of HOME SECRETS:
A terrible car wreck and divorce scars Lily Wheaton inside
and out. Desperate to reclaim normality, she flees to the quiet ambiance of her
late grandmother’s birthplace in Washington’s Cascade Mountains. There, Lily
believes she has conquered her demons. That is, until her ex-husband demands
sole custody of their child. Without funds to battle him in court, Lily will do
anything to keep her daughter, even stand up for her landlord and neighbor,
Grey Montgomery—a man her ex insists is a criminal.

After serving time for a drunk-driving fatality sixteen years ago, Grey escaped
the censure of Hawkes Landing. Now his mother is dying, and he returns to his
childhood home where his sister remains as obstinate as ever, the lack of
medical facilities could mark the downfall of his family, and people won’t let
him forget the nightmare of his mistakes. Only Lily sees him for the man he is
today. But as another tragedy strikes at the heart of Grey’s past, he and Lily
must accept a dark truth about their families before discovering that some of
life’s toughest choices involve the healing power of forgiveness, love, and the
will to go on.

The sky had lightened to a clear blue
when she closed the door, stepped onto the stoop and inhaled the perfume of
white lilacs crowding the corner of her little house. The sun had burned away
the low-lying fog, and conveyed a fecund odor of warmed earth. Lily hurried
down the stoop stairs and headed for the warehouse. At the entrance of the wide
roll-back door, she discerned movement within the murky interior. I have an
excuse to hide in the gloom. What’s yours, Mr. Montgomery?

Her steps faltered.
She waited for her vision to adjust. Ready or not, here I come.
He leaned against the hood of the old,
white Ford 150 Joy had parked there so Lily could use the garage for her
glasswork. Ankles and arms crossed, he was a tall rangy man with large hands
and wide wrists, and an eagle’s head tattooed on his right forearm. Prison residue?
Once, years ago, Effie had mentioned
her son lived an exemplary life in California. What that entailed neither she
nor Joy disclosed, and Lily had never asked. Grey Montgomery, it seemed, was a
blemish his family wanted to hide.
Until Effie begged Joy to call him
home before it was too late.
“Looking for me?” he drawled.
Lily tensed. She stood backlit by the
sun, her outline clearly visible to him. Squaring her shoulders, she asked
bluntly, “Have you decided?”
“About what?”
“Selling the farm? That’s why you’re
here, isn’t it?”
He pushed off the truck and ambled
toward her. The image of a big male lion sizing up a gazelle flashed through
her mind.
From somewhere he’d located a blue
bandana—likely a hip pocket—and was in the process of wiping his hands. “My
mother,” he said, “wants it producing again.”
“And you?”
“Doesn’t matter what I want. For now
Mama holds the deed.”
“But she won’t be—” Around much
longer. Had she nearly spoken the words aloud? Had she become calloused to
Effie’s inevitable death? Effie, who had given Lily a home on her quiet
ancestral land when no one else would.
Montgomery’s gaze softened. “I know.”
The emotion in his tone surprised her. “That’s why I’m home.”
“Forgive me.” Shoving her hands into
the pockets of the hoodie, she headed back outside and started for the field
road through the maple thicket. Up by the big house, the garage and
Scene-In-Glass waited.
“Ms. Wheaton.”
He had wandered out of the doorway and
stood bold and
stunning as a storm rolling over the mountains. “If I decide to revive this,” he swept a hand toward the
raspberry canes and apple trees, “and the place yields again, things might
change.”
She didn’t dare ask what that change
might entail. “When would you begin this…revival?”
“Monday.”
In four days.
Lily scrutinized the fields which
hadn’t known a tender hand in years.
“Don’t know much about fruit farming,”
Montgomery remarked, following her gaze. “Didn’t pay much attention growing
up.” His grin was sudden and crooked. “Maybe I should buy Farming for Dummies.”
Lily didn’t laugh. Rather, she
pictured him at eighteen. Cocky. Brash. Girls on his arm. Beer dangling between his fingers.
No, he would not have cared a whit about pruning and harvesting, packing crates
and marketing.
“Well, then,” she said. “Your work’s
cut out for you. I won’t stand in your way. Nor will my daughter.”
“Likewise. It’ll be me. No crews. But
it will take a couple of months. You okay with me working around here every
day?”
“Do what you want. It’s your land.”
BIO:

Mary J. Forbes writes stories with an
emotional depth that is reflected in each of her characters. Several of her (Harlequin) Silhouette Special Edition books
were Waldenbooks bestsellers, and reached BookScan and Amazon’s respective top
100 lists. Mary loves to
garden and especially enjoys the color and fragrances of the flowers she plants
each spring and summer. The rain of the Pacific Northwest where she lives with
her family is often portrayed in her stories. But once the clouds roll away,
her heroes and heroines always find their rainbow waiting on the horizon.

Mary loves to hear from her readers.
You can contact her at www.MaryJForbes.com and www.facebook.com/MaryJForbes/.