I wanted to share a coup with you all that I’m still
patting my back about. Damn arm gets so sore LOL!
Okay – this is what I did.
Last Christmas – for some nutsy reason, I decided I
was going to write a trilogy of novellas called Holiday Heartwarmers and base
all the stories from the same town, tie them together by three Samoyed puppies
being abandoned in a box in the park and have these adorable little mutts head
out to find their own adventure. Of course, these adventures are all tied
around a love story and happy ever afters.

Move us forward to this year where I’ve opted to
take a group of authors from my Billboard bunch and we’re going to try hitting
the lists this Christmas with a new box collection called Love Christmas.

So… that meant I would need to write another holiday
novella for this set – right? Well I plotted like crazy. Kept my mind spinning
with all the different scenarios I could come up with, but nothing clicked. If
you’re a writer, then you’ll know what I mean.
When you have the right idea, it
clicks like nothing else and from then on, everything falls into place. Well
that wasn’t happening for me until…
Snickering with
glee…
I was checking over all my book sales and
noticed that my Heartwarmer series was still selling even though it’s May. Cool!!
That led me to think about how much people liked Christmas romances – especially
if one throws in a puppy. And wham! Like a brick to the side of my head, these
thoughts exploded:
–
I already had a strong reader base
with the three novellas I’d released this year.
–
I could leave the trilogy alone but
still add more books to the… ahh what I will now refer to as a series.
–
I’d still need a puppy but that was easy
to do since I could have the same bitch ( I mean that in the nice way) birth a new litter.
–
And… crazily enough – have no idea why I
did this until now –  I had mentioned a
third brother in the first book who never did get his story… oh-oh, my arm’s getting another workout…
:-))
–
Best of all, the readers might buy the
collection if it’s the only way to get the next Holiday Heartwarmer story.
Therefore, I did write the book and
the first chapter is on a Sneak Peek with the Authors’ Billboard blog. I got to thinking; if it’s
there, then maybe you should be able to read it too. 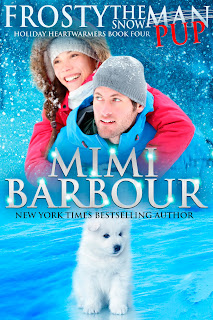 p.s. if you find any errors, I did warn you my editor hasn’t had time to make her magic happen yet 🙂