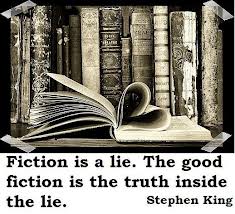 Many of us in the business have gone to numerous
workshops about the first line of a new manuscript they refer to as the hook. Or
read books that scare the living bejesus out of us like “The First Five Pages”.
In a way, it’s easier not to believe
this hype and just carry on with the story in your imagination. Hey, some of us
do so and it’s fine… sometimes.
What about me?
Let me see…most times when I start a new book, I
see my protagonist heading for a disaster. I let my mind carry on plotting and organizing
the elements he or she will have to deal with. The moment I think I’ve taken
them to the point where the proverbial ‘shit hits the fan’; I know it’s time to
start writing. I try and pick the best moment and cut in there. Often, I reword
the first sentence numerous times, keeping in mind that it needs to leave a
question in the readers mind so that they’re forced to keep delving through the
pages to find out the answer.
Also, I try and leave a question dangling at the end
of the first page and hope by the time they’ve read that far, they’re hooked.
Either – they have to continue reading – or they’ve pushed the buy button.
As many of you know, this is no easy feat. Some say,
it gets less problematic with every book you write – not so for me. That first
page is a killer and is, like a lot of writer’s, my most edited page.
Now I know that Stephen
King has explained why opening lines are so vital.  I’ve read a few blogs on his views and I
agree.  Hooks, as they can be referred to,
are terribly important. It doesn’t matter if they are long or short really. What
is important is that they must make the reader ponder. One of the
examples he uses is from James M. Cain’s novel “The Postman Always Rings Twice”.
This line: They threw me off the hay
truck about noon certainly fills that criterion. Of course, anyone who reads that line will speculate as to why?
Ahhh…Hooked!!?
It’s a pretty simple phrase when you dissect it but
it starts the story in a place of action and I have no doubt continues in a
like manner so the reader becomes quickly involved in this person’s life.
Now, one
thing I learned while judging a contest a few years back still haunts me every
time I start a new adventure. And that is – one must NEVER open a story with a
lie. I will reiterate that – one must ALWAYS start a book in the way they mean
to continue.
In other words, let’s say you’ve started that first line
in your WIP promising horrific drama and gobs of fearful incidents. Then for
heaven’s sake, you must deliver a book that’ll keep them on the edge of their
seats throughout. If you’ve opened with a soft lovey-dovey scene of butterflies
and kisses, then don’t have a maniacal killer pop up in the second chapter. Stay
true to what you’ve set them up for.
The book I’m thinking of had a powerful prologue,
incredibly well written and promised lots of suspenseful thrills. Half way
through the second chapter ( I gave them a pass on the first), I began to wonder
if the person who wrote those first incredible lines could have been the same
one who wrote the rest of the book…. or even… if this was the same story. I felt let down and confused and slightly
pissy about being manipulated into thinking it would be a great read.
So, never do that to your fans. Work on that first
line, sure. Make it strong. Leave a question. And then move on to write the
heart of the tale. Trust me. You’ll come back time and again to check whether
that opening hook stills works. And that’s important. But in my book (no pun intended),
it’s the rest of the story that counts.
Goldarnit, this is a fun job, isn’t it??
Opening
Lines from some of my manuscripts:
Surrogate’s
Secret – Sheri O’Connor stood in the doorway of her twins’
bedroom and watched the two peacefully sleeping.
My
Cheeky Angel – Chloe, the three-year-old tattler,
tugged at Annie’s shirt to get her attention. “Carlton  barfed again. His tummy is sick, and he’s
real mad.”
His
Devious Angel – “Slow down, Mate! You could kill
someone at this speed.”
Loveable
Christmas Angel – “Please, sir. You and your wife take
this taxi.
Together
Again – Dani ran up the steps of the ivy-covered house and
then hesitated, her courage wilting.
Together
for Christmas – “Sweet Jesus!” Marcus Chapman shot to
his feet.
Partners
– Two weeks ago, life had been normal.
Roll
the Dice – “You shot me!” Sweet Jesus it hurt!
Vegas
Shuffle – Three weapons blasted. But only one
bullet killed.
High
Stakes Gamble – Bursting with motherly pride, Aurora
Morelli sat in the doctor’s waiting room cuddling her daughter Lily who slept
like an angel while other babies fussed and created havoc.
Spin
the Wheel – Lisa Jordan had a hard time accepting
that her partner, Aurora Morelli, was getting married to the same dude who’d
abandoned her when she was pregnant.
^^^^^^^^^^^^^^^