Once again, I’m very happy to introduce another
lovely author, E.E. Burke. She’s a talented writer and has worked hard to build
her career. A finalist and winner of many contests including a Maggie Award, a
Daphne Award and RWA’s most prestigious Golden Heart, Elisabeth has certainly earned the
right to publish her wonderful story, Kate’s Outlaw.
This is the last in our series of interviews
with three award-winning authors whose fascination with the TV series “Hell on
Wheels” led to a historical romance anthology they wrote together. E.E. Burke, author of the novella Kate’s Outlaw, which is featured in
the anthology Passion’s Prize is sharing her story with us today.

Thank you, Mimi, for hosting us and letting us share
about our stories. Mine is the third of three interlinked novellas revolving
around a historic railroad race through southern Kansas in 1870. We mentioned
that we came up with this idea after watching the AMC television series, Hell
On Wheels. Let me explain a little as to why this series inspired me.

Like Jennifer and Jacqui, I’m a huge fan of
Westerns. There are so few anymore with truly legendary characters (think Clint
Eastwood and Sam Elliott). Hell On Wheels has those kinds of characters: larger
than life, complex and deeply flawed, a mix of good and bad. I love that about
the show, and those are the kind of characters I like to write about.

There is an interview with Anson Mount (who plays
Cullen Bohannon) on TV.com where he says he’d rather play the role of a “weak”
man, versus the stereotypical strong man. I think what he’s saying is a flawed
character makes a much more interesting character, and one we can more readily
identify with. I couldn’t agree more.

Beyond the appeal of writing these kinds of
characters, the fact that this show has been a big enough hit to warrant three
seasons indicates people are hungry for great Westerns.


Now, about our project:

Jennifer, Jacqui and I made the Golden Heart finals
in 2010 with Western historical romances. The idea of writing something
together seemed natural, and using the expansion of the railroads as a backdrop
was very appealing. Even before I started watching Hell On Wheels, I wanted to
set a book in this era because it captures the passions and ambitions that
drove America to ultimately become what it is today.

I’d done quite a bit of research on two railroads in
Kansas that engaged in a cutthroat construction race in 1870. When I mentioned
this to Jennifer and Jacqui, they were excited about using the race as the
backdrop for the book we’d write together. Honestly, we couldn’t come up with
better ideas than what really happened: spies, outlaws, saboteurs, fraud,
settler riots…gosh, that’s like great movie stuff.

We decided to write three novellas interlinked by an
underlying plot (racing for riches) and a cast of characters drawn from life.
We brainstormed the characters, and then each of us took the couple we wanted
to write about. I chose the heiress and the outlaw.

Kate Parsons is the heir to the railroad and the
fortune that comes with it. She also happens to be a free-spirited crusader for
equal rights. She comes west to prove to her father that she can run the
railroad as well as any man.

Jake Colson is an outlaw, and he happens to be
Cherokee. Why make the outlaw a Native American? Historically, the railroad
faced significant opposition from the Cherokee (and other tribes in what was
then Indian Territory, now modern day Oklahoma), who didn’t want the “smoking
dragon” to cross their lands.

This set up a perfect conflict. Add to that, Kate is
wealthy and white and Jake is poor and he’s Cherokee. They face all kinds of
obstacles before they can get to their happy ending. And that leads us into my
story, which I think will speak for itself. 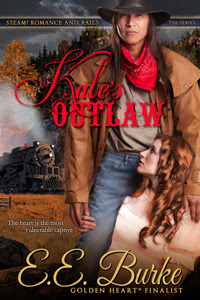 The Katy Railroad may have won a contentious race
against their rival, but construction comes to screeching stop six miles inside
Indian Territory—halted by the Cherokee, who refuse to let the “smoking
dragon” pass. With bankruptcy looming, railroad heiress Kate Parsons takes
negotiations into her own hands. Her plans go awry when she’s abducted, and
worse, finds herself attracted to one of her Cherokee captors, a man so
sinfully handsome he could steal more than her fortune if she doesn’t escape.

Jake Colson, known among his people as Wa-ya, “the
Wolf,” didn’t intend to kidnap anyone, but now he’s stuck with a white woman
whose personality is as bold as her fiery curls. When his partner threatens to
kill her before she can expose their scheme to save their land, Jake takes off
with his beautiful captive. Now, he must protect the woman he’s named Redbird,
and at the same time prevent her father’s railroad from steaming ahead.

Uk-tena crouched on metal rails with its nose
pointed south, directly at the heart of the Tsa-la-gi Nation. Tonight, it
didn’t hiss or spew smoke, as usual, but lay silent as a predator anticipating
a kill.

***For one lucky commenter, Elisabeth will be pleased to present a
Amazon gift copy of her new E-book, Kate’s Outlaw.
Leave her a message, making sure to include your
e-mail address***
You can get Kate’s Outlaw as a separate novella on
Amazon
or as part of the anthology
Passion’s Prize
which is available as an e-book or print book also at Amazon

E.E. Burke writes sexy, suspenseful historical
romance set in the American west. Her writing has earned accolades in regional
and national contests, including the prestigious Golden Heart®. Over the years,
she’s been a disc jockey, a journalist and an advertising executive, before
finally getting around to pursuing her dream of writing novels. Her stories are
as deeply rooted in American soil as her family, which she can trace back to
the earliest colonists and through both sides of the Mason-Dixon line. She
lives in Kansas City with her husband and three daughters, the greatest
inspiration of all.