***********
4.
Make sure you have at least one, preferably two, good editors –
a line editor and a content and copy editor. You need to search for these people.
Do not just accept that if you pay top dollar, you’ll get a great edit because
there’s no guarantee you’ll even get your money’s worth. Searching out
recommendations is the best way to do this (which is why you need to be
affiliated with other Indie authors).
I
learned this lesson the difficult way. On my first Indie book, not having a
huge budget, I decided that I could edit the work myself, have a few friends
read it over (other authors) and this would suffice. Needless to say, the
reviews proved me wrong.
I
also noticed when I read other Indie author’s work, editing was a huge problem.
Wanting to give them a review and be honest proved difficult. I had to write
about the positive parts of the stories and ignore what I knew to be a
considerable problem. Thankfully, a lot of those authors have come to the same
conclusion as myself. In order to get good reviews, the work needs to be clean.
Also,
since I had been used to working with an editor when published with Wild Rose
Press, I knew how much stronger the story became after a professional viewed it
and did their magic.
So
I found a name of an editor on Google and contacted the person. After reading
pages of recommendations she sent me (not from anyone I knew), I decided her
price was fair and I’d send her my new masterpiece. It was my first full-length
for the new romantic suspense series called “Roll
the Dice“. I had set up a lot of promotional advertising about the
book’s release for Sept 15th. Keeping that in mind, I organized everything to
the extent that I had scheduled the editor for mid-August, thinking if the she
took a few weeks, I’d have at the minimum a week to do the revisions.
To
my utter consternation, I received the edits three days before the release
date, and needless to say, a huge amount of revisions were demanded. To add to
my horror, I found I most of it useless. An editor should not rewrite a
book. They are to read your words and make suggestions to strengthen the
sentences, correct bad grammar, and see that the work flows in the best
possible way. They should never rewrite sentence after sentence, changing the
meaning and adding in even more phrases. If they feel there’s a weak area, they
point it out and let the author choose her own words to make those corrections.
With
so little time and determined to follow her changes, (after all we’re told the
editor is the professional who knows best) I found that she had taken license
with my voice and had ruined the work. Instead of me taking advantage of her
edits, I found myself editing her suggestions, which took me twice as long, and
my time was quickly running out. I had no choice but to ignore her work and do
my best so I could meet my obligations and publish the work. It was a horrible
time, stressful and very traumatic. I swore to never let that happen again.
Needless
to say, I contacted some of my Indie friends, told them my plight and got the
names of some wonderful editors who would never treat my work so
unprofessionally.
After
releasing the mangled copy on time for the big day, I worked with two other
editors who helped me repair the damage and then some time after, I republished the clean
manuscript. I wrote to Amazon, explained the circumstances about the book not
being properly edited and asked if they could send out fresh copies to the
people who had received the book so far. They were wonderful and replaced Roll the Dice for everyone who wanted a fresh copy. I so appreciated this…but.
You sensed the but, didn’t you? I wished they would have used the wording I’d suggested
– that the book was being replaced by a newly edited version.
Unfortunately,
what they did say was due to the many spelling mistakes, incorrect punctuation,
etc, etc. they were willing to send anyone sho wanted an updated copy. Sooooo
embarrassing!!! I walked around with a heavy heart for weeks and swore… never
again!
***Disclaimer***I
have no doubt that there are still some older published books of mine with
occasional spelling errors, punctuation mistakes and other problems. I do
intend to fix them as soon as I find the time. But, my goal from now on is that
any book I release will be as clean as possible. 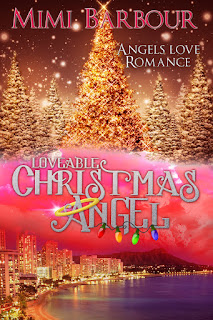 ***Taking
licence to brag!*** Angel
Lovable Christmas is still riding the traction with Amazon and last I
looked was in the  #800 level in ranking –
#11 Contemporary and #14 in Fantasy. I’ve kept the price at the low 99cents in
order to let as many readers have an enjoyable holiday book for themselves and
to give as gifts also. If the 43 reviews (mostly 5 and 4 stars) are to be
believed, this is the story you’ll want to read this season! 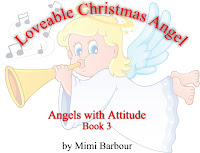