~***~
Today I want to welcome Vonnie Davis to my blog. She’s a sister author with Wild Rose Press and has been one the supporting angels who’ve made me glad I sent in a submission that was accepted. Being one of the roses in their vast garden has been a great experience.
IF WOMEN WERE MEANT TO BE DOORMATS, WE WOULDN’T HAVE BUMPS

Usually my posts are more
light-heated, full of humor and more reflective of my personality. But today
I’m on my soapbox with something to share.
At some point in history, we women
were sold a flawed bill of goods. We were told to be a good wife, we had to be
subservient to our husbands and silently put up with his male moods. To be a
good Mother, we had to “do” for our children. And to be a good employee,
neighbor, or committee member, we had to silently handle whatever was heaped
onto our plates.
In short, we had to be a doormat.
One doesn’t necessarily go hand in
hand with the other. 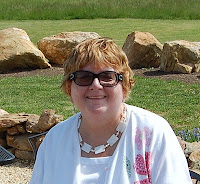 Granted, I thoroughly enjoy spoiling my husband, but I
expect the same in return. If I am to respect him, then by golly, he better
respect me. Things like tenderness, willingness to do little things for the
other, respect, emotional support and all the kindnesses that grease the wheel
of marriage should flow both ways.
I’ll be no man’s doormat—although
I have been in the past. And may an elephant caress my ex-husband with his
toes.
To be a good Mother does not mean
we enter into maternal slavery. We do our children no favors by doing
everything for them. Our daughters and sons need to know how to fix a meal, sew
a seam and scrub a toilet. My two sons know how to stuff a turkey and clean an
oven. My daughter can pound a nail and change oil in her car. As I taught them
to take care of themselves, I also served as Room Mother, chaperone,
taxi-driver and football and wrestling mom.
Motherhood does not lower us to
doormat status; it elevates us to the role of teacher and mentor.
When I was working, I took great
pride in handling my job to the best of my abilities. But don’t expect me to do
Martha’s work, too, especially if Martha is too busy flirting or gossiping or
surfing the net to do her work. Don’t think I’m going to work myself into the
ground so your life will be easier. Ain’t happenin’. 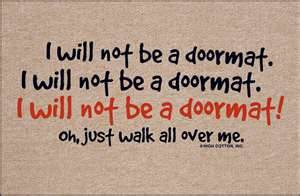 Because if women were meant to be
doormats, we wouldn’t have bumps.
Women aren’t less than.
We are more than.
Yet, somewhere along the way, a
number of men adopted the philosophy that it’s ok to abuse women—physically,
sexually, verbally and emotionally. Some statistics state 1 in 3 women suffer
an aspect of domestic abuse or violence. These men, who inflict abuse, are
either emotionally ill or conditioned by the society in which they live or
their religion that they have a right to “control” their wives by any means
necessary. In their minds, their wife is their doormat.
While it’s easy to say, “I’d never
live with a man like that,” it’s also easier to slip into that pattern of
action and reaction than one might think.
In my debut book, Storm’s Interlude, I deal with my
heroine’s past domestic violence at the hand of Phillip, her ex-fiancé. Rachel
is a home care nurse and Sunny is her patient. They are outside, walking around
the house… 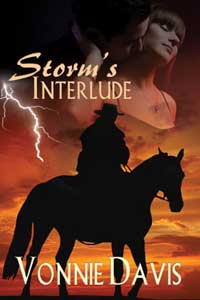 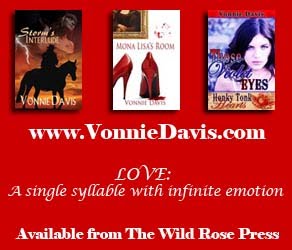