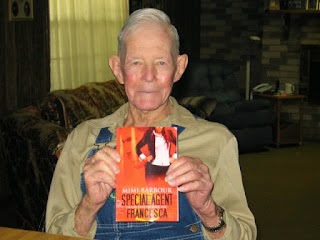 Some of you
might remember my blog post on April 19, 2014. It was about my 100-year-old fan, Norris Smith.
From the first day
his daughter wrote to me about her father’s enjoyment of my writing, his belief
in my talent thrilled me. I mean – any author who learns she has such a special
reader would feel the same as I did… ecstatic – over the moon!!
She’d asked me
to write him a small note for his birthday—that it would please him. Instead, I
surprised him by dedicating Special Agent
Francesca to him and sent him a paperback copy. As you can see by the photo
he sent me as a thank you, he was extremely pleased.
I thought about
my old friend often over the next few years and said prayers for his health and
well-being. Many times, as I wrote the next three books in the Undercover FBI
series, I imagined Norris’s enjoyment and it lightened my heart knowing I could
bring him this kind of entertainment. It’s like I could visualize my reader (Norris)
and I tried very hard to create the stories as he would like them – real barn
burners!
I received a
message from his daughter a short while ago that saddened me to tears. I’ve never met the man and yet I feel as if I know him personally. I’ve rewritten this tribute more than once and decided he wouldn’t expect perfection – just true emotion. And that I sincerely feel.
She wrote: He was one of your biggest
fans and I want to thank you for all the pleasure you gave him from reading
your books.
Norris had
passed. I am saddened beyond belief.
Until… I was
writing my new book Special Agent Booker today and I felt his presence the same
way I always had.
Who says angels can’t read??