***
Today, I’m very pleased to introduce a debut author, RWA chapter co-member and lovely friend, Reggi Allder. She’s pleasantly surprised us all by recently publishing her wonderful debut book called “Money, Power and Poison”. I  read her work and left a review which you can see here.
Hi Mimi, I’m very happy to be
here. Thank you for asking me. 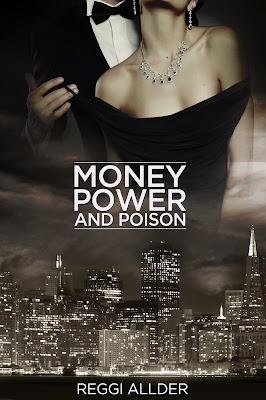 As you know my book Money
Power and Poison is now available on Amazon. I’m pretty excited. It’s a page
turning, romantic suspense that take place in a California beach
community.  But be careful what you wish
for. When my heroine realizes her dream, she’s thrown into the world of the
rich and ruthless and surrounded by a web of lies, betrayals and danger.

Sounds intriguing, tell me
about yourself.
I’m married and have two kids.
The youngest is at university. My husband is a great guy who’s supportive of my
writing full time. I have two dogs, a pure bred poodle and a rescued mutt. They
stay in my office with me while I write. They’re patient, though there are
times when they give me that we-need-a-walk look and won’t take no for an answer,
probably a good thing for me. I’m a film buff and an avid reader. I can’t
resist a good mystery, mixed with a passionate love story. Themes of redemption
and second chances are favorites of mine. I’m drawn to wounded heroes and bad
boys. I’d love to hear from readers telling me their favorite heroes from
either a book or a movie. I’m making a list to be put up later.
What inspired your latest suspense?
Unrest around the world
triggered the inspiration for my second suspense Shattered Rules. When I saw a
report about the turmoil, I thought what if a woman was innocently involved
simply because she was naïve? There’s romance, conflict, intrigue and a theme
of redemption, not to mention a gorgeous FBI agent. Shattered Rules will be available
on Amazon soon.
What is your writing routine
like?
My schedule starts early. I
get up, dress and go straight into my office. I’m usually in the office between
seven and eight in the morning. I’m lucky because my husband brings me coffee
so I don’t even have to go downstairs. These days I even keep that schedule on
the weekend if my book is on a roll. I work until late afternoon. Occasionally I
work after dinner.
Tell me about your current
WIP or series.
I have two WIPs, a romantic
suspense sequel to Money Power and Poison and another contemporary that follows
the lives and events of people in a small town in the California foothills. It’s
the second book in my Sierra Creek Series and follows characters from in Her
Country Heart.
Are you a plotter or a
pantser and have you ever experienced writer’s block?
I’m a pantser. I tried to
plot when I first started writing and I had my first bout of writer’s block. Making
lists and outlines and plotting every scene is a great idea but it just didn’t
work for me. I was lucky to find that out early. I stopped plotting and the
writer’s block disappeared. Now I let ideas percolate. Feelings and plot twists
come to me as I write. I do have a general idea of where to story will end up.
Often I know the end of the book before I have a beginning. I don’t work
backward. But when I begin the first chapter, even though I don’t have all the
characters and the plot turns, I know how the book will end.
Tell me about your characters.
As an author of and romantic suspense and
contemporary novels, I love nothing better than tales of love lost and then
found or stories of heroes and heroine who discover love but wonder if they’ll
live long enough to enjoy it. My main characters cope with longings, secrets,
lies and betrayals. They control their panic and manage their passion as each
fight to discover a hidden strength. It’s a strain for them to remain motivated
as the world offers temptations and puts them in untenable situations. Can they
survive multiple ordeals and carry on to reach their goals and find true love?
In the contemporary novels my heroes and heroines
search for love while struggling with the trials of day to day living,
including the demands of family, finances and employment.

Here are links to my website
and to my book on Amazon:

http://reggiallder.com
http://amzn.com/B00FTIWMOK
Blurb: Money Power and Poison When a billionaire is murdered, a woman fights to
stay alive long enough to prove she’s innocent. An obsessed killer has plans to
make her his next victim. A mystery from the past and lies from the present
could help a reporter make sense of it all before it’s too late and the woman
dies.
In idyllic Carmel California,
billionaire software developer Conner Harrison is poisoned at his fiftieth
birthday party. Young business woman, Kathryn Carlyle is about to be charged
with his murder. Why would the police think she’d murder a man she only met
once? And why is someone trying to kill her? Out of her depth, she wants
someone on her side.
Alpha male, TV reporter Holt
Rand needs a scoop to revive his career. The exclusive on Harrison’s murder
will put him back on top of the ratings game. Nothing and no one will stop him
from getting to the truth. But when he meets Kathryn his life is changed
forever. 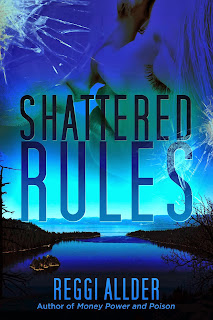 Shattered
Rules
Workaholic FBI agent Brick
Larson loves his job. He doesn’t need personal relationships. He’s been burned
too many times. The last thing he wants is to get involved with the younger
sister of his ex-fiancé. But to defend the United States that’s exactly what
he’ll do.
Kelly Shaw secretly loved Brick
when she was a teenager and would have trusted him with her life then. But that
was years ago. Neither are the same people they used to be. Can she trust him
with her current secret?

Mimi thanks again for
having me.