~****~
Today, I want to welcome my very good friend
Katy Walters. She’s a British lady who has been a sweetheart about hping me
with some facts I needed to know in order to write my Vicarage Bench Series
that’s set in Bury. Isn’t it strange how in today’s world of internet
relationships that you can meet someone you’ve never seen, yet feel so close to
that person. To know that they’d help you out as much as they could because
that’s how you feel also. When I hear people talk about how the computer has
disconnected folks from each other, I have to smile. My experience is
completely the opposite.

I
have based the novel in the Regency period, as it is a time in history that is
fascinating to so many. It is the beginning of women’s emancipation, of
exciting scientific discovery, forward thinking in the arts, and the formation
of the modern novel with Jane Austen.
It is also a time o f romance, discovery and adventure.
I do like my
heroes to be passionate, sensitive and yet strong of character, part of the
group of women fighting for equality. In addition, the Regency is also a period
where Mesmerism was popular; a subject that would later lead to hypnosis,
spiritualism and parapsychology; the latter subjects fascinate so may. I have
an active interest in parapsychology and base my writing around that. I have
tried to write a straight romance but the supernatural always creeps in.
I also draw on my work as a psychotherapist,
where for many years I treated people for neurosis, phobias and obsessive
behaviour. Some therapists, who studied Transpersonal Psychology, use past
lives ( reincarnation) as it is so often a symbol covering deeply buried
trauma. Once a person uncovers the past life –
true or not –
their particular neurosis or phobia usually clears. This subject has also
fascinated people from time immemorial in its classic form of reincarnation.
Again, there are overtones on past lives in Return to Rhonan.

I do hope the readers enjoy
the book and if they have any queries regarding these fascinating subjects they
can contact me on my blog or website. 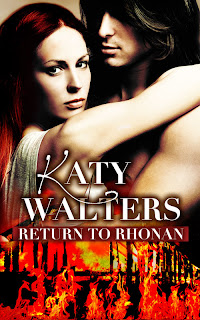 Amazon
A tempestuous love story of two couples
that stretches across the centuries, from the Scottish Clearances of 1810 to
the present day.
Muriall Mondell and Lord Duncan heir to
the Earl of Rhonan’s vast estates in the Scottish Highlands are lovers. Yet
their love is damned as Muriall is the penniless ward of the aging Earl; to
reveal their love would incur the Earl’s wrath, disinheritance, and the scorn
of society. They plan to start a new life on Duncan’s huge estates in Jamaica,
bequeathed to him by his grandfather. Merciless Landlords begin clearing their
vast estates ready for sheep grazing, seizing the land from the tenant farmers,
their cottages burned down over their heads, starvation and death follows.
Muriall and Duncan know they have no choice, but to remain and fight for the
lives of the victims.
In the present day, a young Canadian, Dr Jessica Marshall, owner
of a chain of hotels stretching across Canada, visits Rhonan Manor Hotel. She
meets the present Earl of Rhonan, the brooding Lord Douglas Mavebury,
recognizing him as the man in her recurring dreams.
Deeply
attracted to each other, their love is threatened by demonic forces haunting
Rhonan Manor. To save the Manor, they know they must unravel the disappearance
of the doomed lovers of 1810, little realizing Jessica’s life is in dire peril.
EXCERPT  CHAPTER ONE
RHONAN MANOR – 1810
NORTH-WEST HIGHLANDS
The
young woman leapt up through the surface of the lake, a nymph among water
lilies, her hair, scarlet threads, weaving over white skin. As she turned to
him, the sun splashed light into her green eyes. With an impish smile, she
called out, ‘Come in Duncan, I dare you.’
He rose to her taunts shucking off slim
fitting pantaloons.  His strong strokes
brought him swiftly to her.  Instantly,
she dived down disappearing among the reeds, feet kicking, her white chemise
billowing.   Pushing away the green
fronds snaking around his arms and legs, he grasped the girl’s ankle, pulling
her to him.  Bubbles escaped from her
lips, as she turned, lithe as an eel, her legs clinging to him, kissing his
chest, his mouth. Then, rising like an arrow in flight, she shot up into the
light sparkling through pale green water.
Reaching
the shallows, he hefted her up into his arms carrying her to the grassy
bank.  Teasingly, she bit his ear,
pulling at his black hair, wet and glossy on his shoulders as, he lay her down
gently on the blanket, throwing himself beside her.  Stroking away the scarlet strands from her face he said, ‘Such
beauty and all mine.’ Nuzzling her throat, he found her lips, her tongue.  Responding she pushed into his body, curves
flowing into angles.
Pulling
away, Muriall lifted herself onto her elbow, playing with his hair.  He was gorgeous, looking more rake than
gentleman.  However, she knew he was
faithful to her.  She fell in love with
him when she was all of two years old, a foundling brought into the household. 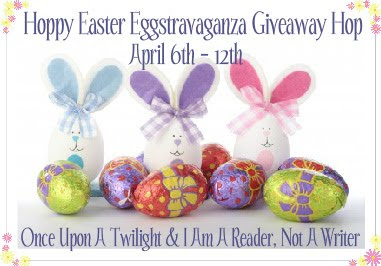 http://iamareadernotawriter.blogspot.ca/2012/04/hoppy-easter-international-giveaway.html
For this Happy Easter Eggstravaganza Giveaway Hop, I will be happy to present the lucky winner with a $10 Amazon Gift certificate. All you need to do is leave a comment with your e-mail address.

I’ll be adding your names to my newsletter list, so I hope you won’t mind getting a periodic letter from me telling of new releases and special news!

***I’ve just re-published my very first novella called “She’s Me” with a new cover and under my own name, and it desperately needs reviews. So if anyone is willing to read the story and do an honest review, please just leave me a message in your comment, and I’ll be ecstatic to send you a copy.  (see more info about this story on The Vicarage Bench page. )