﻿
﻿
I’m so happy to introduce another lovely author,
Jennifer Jakes. She’s published two other books “Twice in a Lifetime” and “Rafe’s
Redemption”. Also a Golden Heart finalist, Jennifer has worked hard to build a
career as an author. Because traditional publishers hesitate to contract western
romances, she went the Indie route and there are many who have been glad. Count
me as one! My 5 star review for “Rafe’s Redemtion” on Amazon was titled “So Good!”
Today, we have the second in our
series of interviews with three award-winning authors whose fascination with
the TV series “Hell on Wheels” led to a historical romance anthology they wrote
together. Our guest today Jennifer Jakes is the author of the novella
Eden’sSin, which is featured in the anthology Passion’sPrize.
Thanks for having me here today,
Mimi! The release of Passion’s Prize and Eden’s Sin has been so much fun! We’ve
had tons of encouragement from friends and other authors – and the icing on the
cake was my debut novel, Rafe’s Redmeption, hit #1 on the Kindle Best Seller
list! So all in all, it’s been a fantastic week!
Like Leigh and Jacqui, I’m a
huge fan of  the Hell of Wheels TV
series. I’m the nut who when I saw the first advertisement 6 months out, I
marked my calendar to make sure I could watch the premiere. Yes, that’s how
excited I was to see the Historical Western Genre making a come-back. I grew up
watching Clint Eastwood movies, along with specialty series like Centennial. For
me, anything Western held my attention. That has never changed.
So when we decided to write
Passion’s Prize, why did I pick the former prostitute and the soldier? Well,
Leigh said she thought I could handle that one. LOL I honestly did laugh and told
her I wasn’t sure if that was a compliment, but that I’d be happy to write
those characters. You see, I have a weird fascination with Old West
prostitutes. How did those women end up in those kind of lives? Did they choose
them? Forced into them? I have several research books about that vocation in
that era, and if anyone thinks Miss Kitty from Gunsmoke is a real
representation, let me assure you that is all lies.
While a few—very few—chose the
life, thinking they might get rich, most had no choice. Or their choice was do
this or starve. Women working as a laundress or in a factory (in the East)
would make pennies per day compared to the dollar(s) per day a prostitute could
make. But the conditions in which the lower-class doves worked was deplorable.
High-end brothel girls had it pretty good…until their looks faded. Then they
slowly made their way down the “ladder” until they died or ended up in a
crib-house—a shack where the men didn’t even bother to undress for “servicing”.
When a cattle drive would come through town, the crib girls could service up to
75 men in 24 hours.
So on that sad note; I knew
Eden’s life of prostitution wasn’t something she would have picked for herself.
Coming up with her story was challenging but the research was very interesting.
I hope readers will enjoy reading Eden’s Sin as much as I enjoyed writing it!
Now here’s an excerpt. 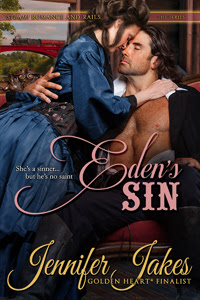 Eden smoothed the skirt of her plain
brown calico dress and patted her tightly braided bun, draping her woolen shawl
over her head. She had to appear a reputable lady of town or else she didn’t
stand a snowball’s chance in Hell of convincing some Army man to hear her out.

The rain had slowed to a drizzle,
hanging in the air like a fog. The smell of smoke and manure circled in the
air, and she shuddered at the damp breeze. Lifting the hem of her skirt, she
stepped off the boardwalk onto the muddy street. Biting back a curse, she tried
not to limp. The last thing she wanted was questions from the soldier.

She dropped her gaze and hurried toward
the end of town.

Down the street, the sound of men
barking orders and hammering tent stakes echoed from the empty lot beside the
livery now filled with horses.

Swallowing her doubt, she strode toward
the camp.

Would she stoop to lying to claim help
for Mary? Yes, why not? Heap yet another sin upon her head. Whatever it took to
find justice. At this point murder was the only wicked deed she hadn’t
committed—though there were men who tempted her to do just that. Two in this
town alone. Judge Parsons one, Henry Stevens the other.

Parsons had already made it clear he had
no intention of pursuing the man who raped Mary Rose—a whore in the making. The hateful phrase burned through Eden each
time she replayed the scene. He refused to lose the man-power for a search. He
didn’t want to know if one of his workers committed the crime. Not that she
suspected the McGrady Gang. Cormac’s men were the most upstanding men in town.
Possibly the only upstanding men in town. But the stragglers who hopped from
the Joy line to the Katy, always searching for the higher pay wage, those men
were cruel drifters with no morals and no conscience. And she intended to see
the man guilty of destroying Mary Rose’s innocence prosecuted.

She wove her way through the muddy row
of tents already standing, to a large wall-tent at the end of a military street.
Poking her head inside the open flap, she spied two men unpacking satchels and
setting up a foldable wooden table.

“Excuse me.” She cleared her throat and
spoke again. Louder. “Excuse me, gentlemen.”

Both men turned, the taller planting a
worn, wet hat onto his dark head. Damp hair, a little too long, curled around
his ears.

Her heart pounded, but she swallowed and
stood up straighter. Too late to turn back now.

“Yes, Ma’am. Come in. What can we do for
you?” His voice was, deep, strong, but not harsh. There was a lot to be known
about a man through his voice. Not his words. Words were lies, more times than
not. But if a woman knew how to listen, she could learn with what kind of man
she dealt. This one she felt, she hoped
against hope, was fair.

“I need a word with your commander.” She
forced her voice to stay calm, sound refined, the kind of soft elegance she’d
learned so many years ago. “Would that be you, sir?” Stepping inside, she
dropped the shawl to rest around her shoulders and tried to paste a respectable
expression on her face.

“That would be me, Major Bradford, at
your service.” He walked toward her, long, lean, a rare handsomeness. She
swallowed hard. Damn, why did he have to be handsome? She didn’t want to notice
a man ever again. Not as long as she lived. The last handsome man she trusted
tried to kill her.


***
Thanks again for having me here, Mimi! I want to
give a FREE eBook of Eden’s Sin to 1
lucky commentator. So be sure to leave your email with your comment for the
drawing!
***


About the Author!
Jennifer Jakes 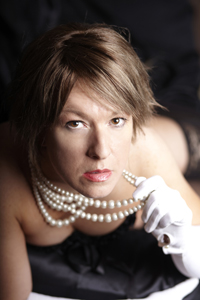 After trying several
careers—everything from a beautician to a dump truck driver—Jennifer finally
returned to her first love, writing. Maybe it was all those Clint Eastwood
movies she watched growing up, but in her opinion there is no better read than
a steamy western historical.

Married to her very own hero, she
lives on fifteen acres along with two beautiful daughters, two spoiled cats,
three hyper dogs and one fat rabbit.
During the summer she does Civil
War re-enacting and has found it a great research tool, not to mention she has
continued appreciation for her microwave and hot water heater.
Her debut novel, RAFE’S
REDEMPTION, was a RWA Golden Heart finalist and Won BEST ROMANCE 2011 at DITHR
and many other awards. RAFE’S REDEMPTION has since become a #1 Best Seller on
Amazon!
Her second book, TWICE IN A
LIFETIME, was an International Digital Award finalist. It has also recently
become a #1 Best Seller on Amazon!

Visit Jennifer Jakes at www.jenniferjakes.com or find her books
on Amazon at http://www.amazon.com/Jennifer-Jakes/e/B005OMTLWW/ref=ntt_athr_dp_pel_1