I have been eagerly looking
forward to introducing this wonderful Anthology called “Passion’s Prize” to my
blog friends. We have a treat lined up for you. Each day, we’ll meet one of
the three authors who worked together to produce this book. I don’t know about
you romance readers, but personally, I have always enjoyed love stories set in
the Wild West. Having three of them under one cover is fantastic!!

***
Today, we begin a special series of interviews with
E.E. Burke, Jennifer Jakes and Jacqui Nelson, three award-winning authors whose
fascination with the TV series “Hell on Wheels” led to a historical romance
anthology they wrote together.
Thank you, Mimi, for hosting us and letting us share
about our new release, Passion’s Prize. We’re calling it an anthology, but it’s
actually three interlinked novellas that revolve around a historic railroad
race across the Kansas plains in 1870. Passion’s Prize is the first release in
the series, Steam! Romance and Rails, which will feature stories from America’s
golden age of steam railroads.

How did you decide to work together on this
anthology?

Elisabeth: It was almost accidental, or maybe I
should say, pre-ordained. Last year, I saw Jennifer at a conference and we were
commiserating about how publishers claimed there wasn’t a market for American
historical romances. We’d both made the finals of the RWA Golden Heart contest
in 2010 with Western romances. And Jacqui had won that year with a Western
romance. I remarked, “We ought to write a book together and just put it out
there. Find our audience.”

Jennifer:  And
I said, “Yeah! Writing with other Western authors would be great. Let’s do it.”

Elisabeth: Once I picked my jaw up off the floor, I
told her I’d been watching a Western series on television, AMC’s Hell on
Wheels. Why not create something like that?

Jennifer:  I
laughed. Because Hell on Wheels is one of my favorite shows. It’s like a
required “course” for Western Historical writers. So I was all about using the
HOW era as a base idea.

Elizabeth: I also mentioned I’d done a lot of
research on the railroads for another story I was working on and we could use
this.

Jacqui: I love it when someone’s done a lot of
research and I can just build on their knowledge. And I was thrilled when
Elisabeth and Jennifer contacted me after that conference and asked if I would
join them on this project.

Elisabeth: We wanted to create stories within a
story, using characters with their own arcs impacted by an overarching plot
line that drives much of the action. Some brainstorming sessions led to three
story ideas and our anthology was born.”

Elisabeth: Something about railroads calls to my
romantic nature. Maybe it’s the passion and excitement of a long-ago era when
America expanded its boundaries as fast as men could lay track. I wanted to
give readers a glimpse into that exciting time period.
Jacqui: Jennifer and Elisabeth had me onboard at
Hello.  And after watching season one of Hell on Wheels at Jennifer and
Elisabeth’s urging, I was even more hooked on writing a railroad story. The
Hell on Wheels characters are amazing, compelling, tortured, passionate,
determined and multi-dimensional. Everything a writer dreams about.

Jenn: In my Golden Heart book, Rafe’s Redemption, I
had touched upon the building of the Transcontinental Railroad and in doing the
research on that, it sparked my interest in the expansion of the railways. When
Leigh mentioned the Katy, I thought it was very cool since the Katy Trail (the
old rail bed) is now a biking/hiking trail and my family and I have gone for
bike rides there.

What have you enjoyed the most about working
together?

Elisabeth: The opportunity to work with incredibly
talented writers who are as jazzed up as I am about Western romance. We feed on
each other’s ideas and enthusiasm. I’d gotten very beaten down and had even
contemplated throwing in the towel. But coming together with these wonderful
friends and fellow writers to publish the kind of fiction we love has revived
me and given me back my energy and excitement.

Jacqui: After working on our anthology for several
months, it was a blast to finally meet Elisabeth and Jennifer in person once
more at an RWA conference. I felt even more connected to them because of our
experiences working together on such an interesting writing project.

Jenn: I think the accountability of pressing forward
with chapters. Yes, I’m a procrastinator and knowing Jacqui and Leigh depended
on me to write helped me get my pages done. LOL

Tell us a little
about the story of Passion’s Prize. 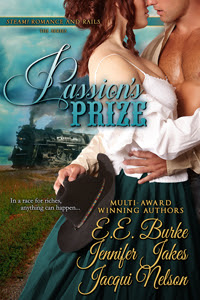 Passion’s Prize is based on an actual construction
race between two railroads with very long names that were dubbed The Border
Tier and The Katy. The race took place primarily in 1870, when both lines were
laying track through Kansas as fast as they could to be first to reach the
border of Indian Territory (modern day Oklahoma). Congress had promised the winning
line free land and the exclusive right to pass through Cherokee lands into
cattle-rich Texas.

The railroad owners were ambitious men willing to do
just about anything to secure the prize. Their henchmen hired spies, saboteurs
and even outlaws to disrupt the competition.

Our stories revolve around three women—a spy, a
madam and a railroad heiress—whose lives hinge on the outcome of this race.

The race heats up as former Rebel spy Adella Willows
receives her mission from a Washington senator—play havoc with the Katy and
derail its bid to win the race. The senator craves wealth. Adella craves
revenge against the man responsible for her brother’s death. But her plans
crumble into chaos when she matches wits with the railroad’s foreman, a
handsome Irishman torn between two desires: winning the race or winning
Adella’s heart.

Passions rise when a beautiful madam must rely on an
Army major for help. Eden Gabrielli lives by three rules: Never trust the
wealthy, do whatever it takes to survive, and never again believe a decent man
could love a whore. But when a blackmailer threatens, she will do anything to
protect her sister—even if that means deceiving the handsome and determined
Major Bradford, the one man who tempts her to break her rules.

Fortunes fall as the Katy Railroad battles the
Cherokee Nation over land rights. With bankruptcy looming, railroad heiress
Kate Parsons takes negotiations into her own hands. Her plans go awry when
she’s abducted, and worse, finds herself attracted to one of her Cherokee
captors, a man so sinfully handsome he could steal more than her fortune if she
doesn’t escape. t.

Rather than share an excerpt—because how could we
possibly choose one excerpt from an anthology written by three people? —we’d
like to share a small sample of each of our novellas…

Standing on the fringe of a courtyard full of women,
Adella Willows waited to make a bargain with the Devil. Not that the Devil
himself was coming to meet her. He was sending a fat, yellow-bellied Yankee
senator dressed in a suit as fine as President Grant’s.

“The Indians call it a smoking dragon.” Kate’s
father gestured to a framed image of a locomotive hanging in his private
railcar.

Passion’s Prize has just been released and those
who are interested can purchase it from Amazon as an ebook or paperback. It
will also be available at B&N Nook store and the Apple iStore.