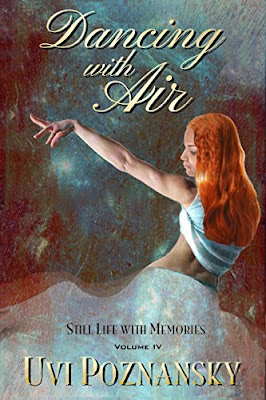 Interview with
Uvi Poznansky
Author of Dancing with Air
At the end of summer, it is time to turn a leaf, and I hope that for
you, that will be a leaf from my new WWII Romance book, Dancing
with Air. Let me sweep you away in time, to the other side of the
ocean. Through the eyes of Lenny, an American Marine, and the love of his life,
Natasha, experience what life was like in England during the months leading up
to D-Day. Every love story suggests some hurdles that stand in the way of love,
but in times of war, these hurdles are particularly high, testing the power of
passion to the utmost degree.
What genre do you enjoy the
most?
I love writing historical
fiction, because it is one of the most difficult genres of all, demanding a
complete immersion in the era and studying every detail–in clothing, gadgets,
hairstyle, manners and of course, the timeline of events–in order to make the
story not only believable but utterly authentic. And even though I pride myself
on writing with a sensual slant, aiming to put you in the skin of the
characters, I have never before focused on the genre that would allow me to
develop that lyricism to the fullest: namely, Romance.
But lately, the characters I
have written in a previous book, My Own Voice, demanded that I take them back a generation, to
WWII, to the beginning of their love story. This is how The Music of Us came about, telling the story of how Lenny first
met Natasha, a young concert pianist, and how they fell in love. My
new novel, Dancing with Air,
takes their love story takes a new turn, and throws in a bit of suspense.

Serving
on the European front, Lenny writes bogus reports, designed to fall into the
hands of Nazi Intelligence. To fool the enemy, these reports are disguised as
love letters to another woman. This task must remain confidential, even at the
risk of Natasha becoming suspicious of him.

Once she arrives in London, Lenny takes her for a
ride on his Harley throughout England, from the White Cliffs of Dover to a
village near an underground ammunition depot in Staffordshire. When he is
wounded in a horrific explosion, Natasha brings him back to safety, only to
discover the other woman’s letter to him. He wonders, will she trust him again,
even though as a soldier, he must keep his mission a secret? Will their love
survive the test of war?
***
An integral part of this story is the music. For
each chapter, I composed lyrics that not only bring back a familiar note from
that era, but also reflect the particular mood of the character at that moment.
Please share an excerpt from Dancing with Air with us.
The mood was
altered, not only for me but also for my sweetheart. After hanging up the
receiver we stumbled into silence.
After a while I
offered to escort her to Mrs. Babcock’s home, but Natasha refused. She kissed
me goodbye, a bit hurriedly, and said that a long walk, by herself, would do
her good.
I watched her
walking away from me, her figure shrinking into the distance under the London
Plane trees. Stiff-textured leaves were swirling in the evening breeze. One of
them, lobed like the palm of a hand, landed on my shoulder as if to say, don’t
take it to heart. This had been a long day. Things were bound to look brighter,
come next morning.
Yes, I said to
myself. Natasha must have been exhausted now, and so was I. What’s more, her Ma
was an expert in taking control of the conversation, which was why it took the
wind out of both of us But tomorrow, she would come back for me, really she
would.
I took a stroll in
the opposite direction, then stood a long time by the fountain, watching other
couples coming by, walking hand-in-hand.
A street performer
tried, several times, to gather some of them into an audience, all in vain. No
one paid attention to him. Perhaps it was too late. The sky was getting darker.
Time to go home.
He stopped by my
side, perhaps sensing my sadness, and sang, in the softest voice,
When we kissed goodbye in Mayfair
Forever I’ll recall
Chill trembling in the air
Summer turning to fall
When you left—I may be wrong—
But it was too hard to bear
A nightingale stopped in the middle of a song
Silence lingering over Berkeley square.
Author Links:
Blog
Facebook author page
Amazon author
page
Goodreads author page
pInterest
@UviPoznansky
Buy links for Still Life with Memories:
Vol
I  My Own Voice                 ebook print audio
Vol
II  The White Piano              ebook print audio
Vol
III  The Music of Us             ebook print audio
Vol IV
Dancing with Air            ebook print
Vol
I+II  Apart from Love           ebook print audio