Sounds like good advice and easy to do, right?
Not so.
I can’t tell you how many professional authors
suffer from this very situation. They know the story they want to tell.
They even have a really good idea of their
characters, the hero and heroine and the dynamics that will drive them through
the conflicts.

And… they’ve plotted out the chapters, the struggles
that these people will suffer in order to reach their goals. Once they’ve figured
out the motivation that makes them act in ways they do, everything begins to jell.

Finally, they’ve ticked off all the points that they’d
planned to share with the readers and the story is over.
Except, they have no ending.
I’ve gone to many workshops and have read a lot of
posts where individuals rant on about just how important the beginning is… they
call it the hook. Even the first chapter, paragraph, page, hell the first
sentence is freakin’ imperative because in their minds, it’s that section that gets
the reader sucked in. (I mean that in a good way 🙂
And… we all know that to be true.
But I say the ending is even more so. Picture this…
A reader gets captivated by your work. He/she reads all the way through that
book, totally enjoying your story and then you let them go with an ending that
is so trite, it triggers a ho-hum feeling rather than the sensation of: Ok –
that’s cool! or Aww! Or even – I never saw that coming. Even more important, to
leave them with the thought of – I wonder what other books she/he has for sale?
Just so you know, I struggle really hard to make my endings
resonate with the reader and I think I’ve succeeded with the last book in the
Holiday Heartwarmers Trilogy. I made sure that I finished off the third book
with my some of my very best work and since the ending of the story left me in
happy tears, I’m hoping it will have the same effect on anyone who reads it.
In this novella, I just had to bring Sergeant Harley
Carlton back and let him have his own tale. When I wrote the first book, Please
Keep Me, he appeared and he got to me – in a good way. And so, it just made
sense to resurrect him and let him finish the trilogy with a blockbuster.
In this book three called Find Me a Home, we have the cranky puppy, Grumps, deciding that the
only person he wanted to be with was Amelia, the mistress who thought he was
perfect and who he was snatched away from. And so he trudged all the way home
only to find her in terrible trouble.
If you like stories that will get your emotions
involved, where you laugh and cry and find you really care about the ending,
then this is the collection for you. 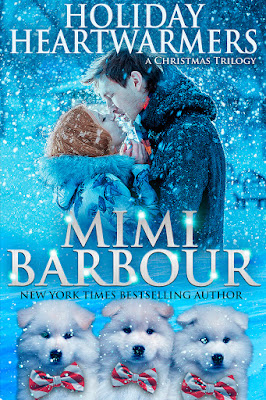 Please Keep Me
A puppy, a brave little girl and a single mom, who can’t refuse her munchkin the chance to get to know her secret father, turns this story into a real heart warmer.

Snow Pup
A small town’s lovely deputy and a father, who lost his son years ago to a vindictive wife, team up to save the kid from a foster home he hates and an overzealous social worker who thinks she knows best.

Find Me A Home
An accident changes the lives of: a little girl who loses her parents, a crabby puppy who hates all men, a soft-hearted beauty who fears for her brother and… also the cop who can’t escape his destiny.