**Welcome
again, Jacqui, with your beautiful cover for your newest release. I Can’t wait
to get it in my pudgy little fingers!!!
Thank you once again, Mimi, for
hosting me on your blog during the two-day reveal of my upcoming new release!
Yesterday, I shared the cover for my
newest Western historical romance available this June. Today it’s excerpt
time.
I’m delighted to share with you
this never-before-seen excerpt from Between
Heaven & Hell. I hope you’ll leave a comment for a chance to win a free copy of the story that
earned me a Golden Heart® for Historical Romance. 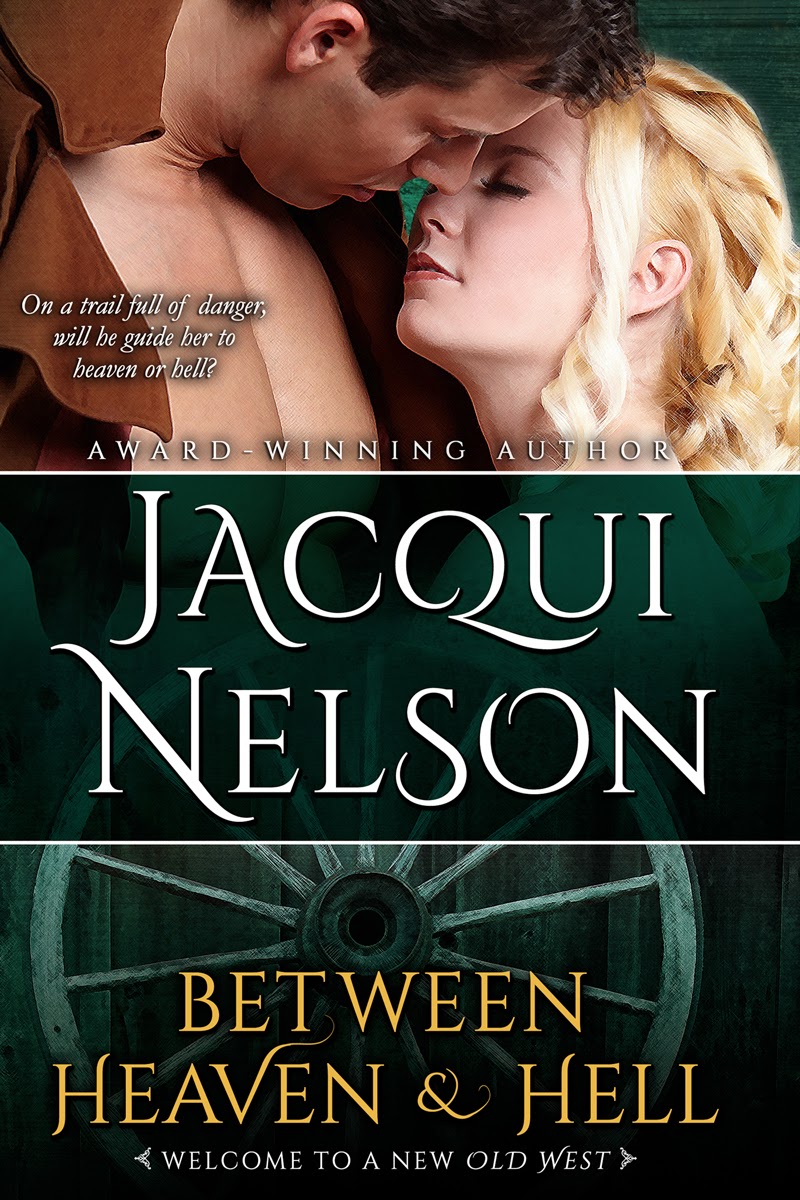 Paden Callahan lifted his gaze skyward. High above
him, the pale blue arc didn’t even come close to rivaling the eyes of the woman
standing beside him. How on earth had she made that shot? He knew only a handful
of men capable of the feat she’d accomplished. Most of them were seasoned
Rangers. Men from a life he’d left far behind.

He shook his head. A woman couldn’t be a scout. The
job was chockfull of hazards. But the competition had been dangerous as well.
Why had he allowed her to stand off against a brute like Dawson? Why had he
behaved so impulsively?

Dawson looked none too pleased either. He clutched
his rifle against his chest in a white-knuckled grip. “If you hire her instead
of me, you’ll be sorry.” The scout’s voice was as close to a hiss as any Paden
had heard. The man wasn’t going to leave quietly.

Paden suppressed a growl of impatience. He hadn’t
shot anyone in years and meant to keep it that way. He strove for an even tone.
“I’ve got a whole saddle bag full of sorrys. Adding another won’t make much
difference.”

Dawson lowered his spent rifle until it hung by his
side. His free hand twitched, inching toward the loaded pistol strapped to his
hip.

Paden drew his revolver, cocking it on the upswing
and leveling it at Dawson. The feminine gasp close beside him made him freeze.
He suppressed the urge to tell her he wasn’t a killer. Why lie? He’d pulled the
trigger in the past, and Dawson needed to believe he’d do it again. “Keep the
supplies we advanced you. That’s more generous than I have to be. But this is
the last time I’ll tell you—leave.”

This time she didn’t retreat, but
every bone in her slender body leaned away from him. He shouldn’t have reached
for her earlier when she swayed on her feet. Being almost grabbed by a lout
like himself had only added to the storm of emotions he sensed in her: caution
warred with curiosity…and something more.

After his wife was murdered by
the Comanche, Paden let his work as a Texas Ranger consume him. Now he wants
nothing more than to disappear into the West. Unfortunately, the one man he
can’t refuse has asked him to guide a wagon train full of tenderfoots across
thousands of miles of Indian land. But Paden’s greatest challenge turns out to
be Hannah, a woman his heart won’t allow him to ignore even though she was
raised by an enemy he hates.

Be the first to receive Between Heaven & Hell as a gift
directly from the author! Leave a comment below (with your e-mail address) and
you’ll be entered in a draw to win a
free e-book (for your Kindle or your computer).

Thank you everyone who visited
yesterday and left comments!

To
learn more about Jacqui and her writing, please visit…