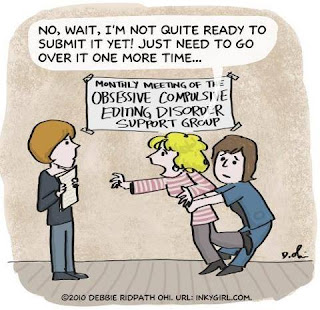 Gotta edit it one more time… I’ve never had that problem and I wished I’d have
been more so. Back in the early days, I relied totally on my editor with Wild
Rose Press and she came through for me every time.
She made sure each word was spelled correctly, that
the punctuation was perfected and that there would be nothing to embarrass me
once they’d published the book.
So easy…
I loved it.
Then, I went Indie.
Now it was up to me to make sure I had the right
editor and I did that. In fact, I got two and then a proof-reader. With a
couple of read-throughs from me, I thought it we’d be safe. What I didn’t take
into consideration was that though these people made sure my words were
correct, none of them were there to point out that the sentence wasn’t strong
enough. That the way I had worded something could be a lot more intense, less
passive, etc..
They weren’t paid to mess with my words or my voice,
but without someone who made me aware there were weak areas, I sailed through
book after book thinking I had it covered.
Then, something happened without me even being
aware. I… was getting better. As I wrote these books, I seemed to know when I
hadn’t given enough detail or hadn’t worded it as strongly as it should have
been. Like tiny lightbulbs flipping on as I wrote, I could clearly see when something
needed attention.
What a high!! I loved it.
But… a person should never get complacent.
Recently, I had a friend, a very good author read
the first three chapters of the first book of my new up-coming series called
Mob Tracker, and she noted quite a few weak places that I had let pass. True,
it had only been my first draft but I truthfully don’t know if I’d have picked
up on these mistakes or not.
It was a wake-up call and I’m now driven to be even
better, more careful. And you know what, as I’m writing the next book in the
Undercover FBI series, Special Agent Kandice, I’ve found myself being more
attentive. I figure it’s called developing your voice or maybe strengthening your
craft and you know what? I hope it never stops!!
I guess it doesn’t matter what a person does, right? This phenomena should still be happening no matter what your career.
*****