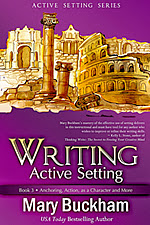 Today, I wanted to share with you another workshop
that I found utterly fascinating, extremely helpful for future creativity and a
heck of a lot of fun. My friend, Mary Buckham is a genius when it comes to
sharing knowledge and presenting facts that – when explained properly – make so
much sense.

Often, she gives courses for the members of RWA on
their University site and I’ve been fortunate to have signed up for her latest
on Settings. In fact, I liked that course so much; that I also went to her ‘Writing
Active Settings’ workshop in Seattle. Figured I reconfirm what I’d learned.
Plus I’d get to watch a pro in action.

Through the examples she chose to read, she made
settings so vivid and imaginative that one instantly realizes what a tool we’re
missing if we don’t incorporate some of her suggestions into our own work.

There were seven reasons she gave us as to why
settings should be taken seriously.

Setting can anchor the reader and orient him as to:

I’ll give you an example of what I mean by time
passing. Rather than falling back on those same old transitional phrases we all
use such as: Sometime later… or Days passed… let’s try writing a setting such as
Mary suggests.
By
the time the cops released Anne, the fresh red roses she’d purchased the
day of her arrest were wilted, the stems congealed in slimy green
water.
Do you see what I mean? By showing the state of the roses, the reader knows that Anne must have been held for days.
I’ve been playing with this
setting stuff and it’s kinda fun. You’ll use more words, it’ll take some
thought but it really can add a lot more oomph to your story. **If you write suspense or thrillers, you might want to be careful not to slow down the tempo especially in an action scene.

And remember too much of a good thing is still – too
much. Use it sparingly, pick places where it’ll add and not detract from the pacing.
And if you want to know much more than the small bit I’ve shown you here, go to
Mary’s website. You’ll see she has books for sale there, very reasonably priced,
that will explain this to you in much more detail and with a heck of a lot more
skill than I have.